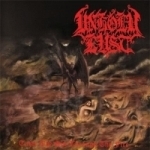 Courtesy of the fine Blood Harvest Records, UNHOLY LUST releases their first LP, after 2 independent live albums (?). Anyway, the first thing that came to my mind when listening to "Taste The Sin Through The Fire" was early SODOM. Yep, these Californians have crafted a relentless Blackened Thrash attack reminiscent of the good old days. Throughout the album, the songs don’t vary too much, but most of them have memorable parts that just stick to your head like vermin. There is no melody or harmony here, but a bunch of tremolo-driven riffs, sometimes too simplistic but really effective. ‘Infernal Blasphemy’ is a really good example of this, mixing really good riffs with a great heavy as hell bridge suitable for extreme headbanging! The production is good, with an old South American flavor that adds a lot to the obscure feeling, although the sound is a bit muffled. The mix could be better since the guitars are a little too loud for my taste. Guitarist Alvaro Sance’s vocals are raspy and raw. Drummer Humberto Medina thrashes on a great performance backed up by Franco Gonzales on guitar and Kelsey Wilson pounding the bass. So there you go, a really good album in the vein of old SODOM and KREATOR with plenty of speed and aggression. You can’t ask for more. Recommended! www.myspace.com/unholylust, www.bloodharvest.se