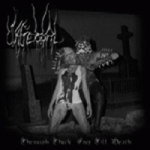 It seems that I made a big mistake in ignoring these guys for so long… You know, for some reason I always figured that Norway’s URGEHAL was just another superfluous faceless Black Metal act, that in the first place was trying to gain attention through their outraging image rather than their music. But as soon as I got to hear their fourth album "Through The Fog Till Death" I immediately knew that I did them wrong! For obvious reasons I can’t tell you whether or not their previously released material already knew to convince with a similar quality, but at least "Through The Fog Till Death" is a superb example of how great Black Metal can still sound after so many years of zillions of stupid releases. This is harsh, grim, icecold and very barbaric sounding traditional Black Metal, yet produced very well (without sounding polished) and with strong influences from old SATYRICON and DARKTHRONE (mainly). Of course this ain’t original at all, as there’s already a lot of similar sounding acts around, but URGEHAL deliver the goods with so much hate and class, that I immensly enjoyed this album from start to finish, turning me into a new addicted who will certainly check out their back catalogue as well! So, in case you’re sick and tired of what most label’s are still trying to sell as ‘Black Metal’ these days, avoid all the bullshit and give "Through The Fog Till Death" a chance instead! Label contact: www.agoniarecords.dm.net.pl