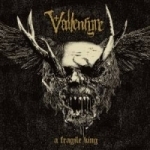 If you have been following the Metal news then you surely must’ve heard about this new band VALLENFYRE, formed by PARADISE LOST guitarist Gregor Macintosh who assembled such veterans as Hamish Glencross (MY DYING BRIDE) and Mully on guitars, Scoot (DOOM, EXTINCTION OF MANKIND) on bass and Adrian Erlandsson (AT THE GATES, PARADISE LOST) on drums to play old school heavy as fuck Death / Doom Metal. Add to this the fact that they’ve been snatched up by Century Media right after releasing a 2 song (‘Desecration’ and ‘Iconoclast’) 7" EP and you have one of the most anticipated debut albums this autumn. Now those more curious among you can Google up a couple of interviews with Gregor and find all about how this band came into being and the reasons behind it, but suffice to say that those reasons are honest as honest can be and it definitely shows when you hear the album. Mostly written by Gregor Macintosh, "A Fragile King" displays crushingly heavy and gloomy riffs harking back to the days of first PARADISE LOST album "Lost Paradise" masterly weaved among quite simple but adventurous and dynamic drumming. Add to this low, gruffy vocals and earth shaking basslines in the best tradition on AMEBIX, paint it black with some HELLHAMMER-ish dirge and give it a rotten Swedish Death Metal boost circa ENTOMBED "Left Hand Path" or DISMEMBER "Like An Ever Flowing Stream"… well, I could go on further, but I guess you get the picture. It’s done with such conviction that VALLENFYRE manages to take you in into their dark universe and keep there for the whole album’s playing time. This is a brutal, dark masterpiece recorded by people who’ve been playing this music for over 20 years, but with fresh perspective. I mean, you hear the familiar elements most of the time, but they’re twisted around and performed with such craft that you want to come back to it again and again. For example, take a track like ‘The Divine Have Fled’, it starts like a total ENTOMBED / DISMEMBER / GRAVE worship, goes into mid-paced bridge, drops down into a doomy, vast, PARADISE LOST influenced soundscape, before picking up and destroying you again with a Swedish styled dodsmetal onslaught. It is mostly kept between slow, doomy and mid-paced tempos, occasionally turning into faster paced punishung attacks, but those are far and few in between, the key words here are Heavy, Doom and Death! This is as real as it can get in 2011, definitely Top 10 albums of the year and you’be be a complete fool to miss it. Death / Doom Metal of highest calibre spread through 11 tracks (12 on digipak edition). If you can buy only one album this month, make sure it’s "A Fragile King" by VALLENFYRE! www.vallenfyre.co.uk, www.centurymedia.com