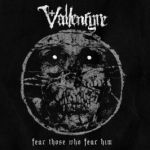 VALLENFYRE
Fear Those Who Fear Him
(Century Media Records)
38:59min

Gregor Mackintosh of PARADISE LOST launched VALLENFYRE back in 2010 to combat his inner demons and to process his musical roots. Alongside musicians such as Hamish Glencross (ex – MY DYING BRIDE) and Adrian Erlandsson of AT THE GATES it shouldn’t come as a surprise to anyone that they make convincing Death Metal spiced up with Doom and heavy Crust. Compensating for the departure of drummer Adrian Erlandsson and bassist Scoot, Mackintosh enlisted fellow PARADISE LOST bandmate Waltteri Väyrynen to play the drums while Hamish Glencross took over bass duties as well as guitar in the studio. The press release reads as follows: “Twelve songs. No samples, No triggers, No bullshit” – that is precisely what you get. There’s bits of ANTISECT, DISCHARGE, BOLT THROWER, NIHILIST and early PARADISE LOST to be found, showing us the band’s true intent and nature to go back to the roots of the Crust and Death Metal genres. Varied, but with unifying sounds, "Fear Those Who Fear Him" is a kind of tour of the overlapping sections of Crust / Doom / Death. The album is very well produced, it sounds immense and murderously persuasive without sounding too smooth. In comparison to its predecessors the album keeps up the familiar quality and will satisfy everyone interested in Doom / Death crossover, Crust / Punk and even early PARADISE LOST. Miserable, pitch black, pure and simple. More info at: www.facebook.com/vallenfyre, www.centurymedia.com