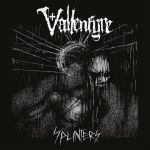 After a rather surprising, convincing and successful debut album that got lots of praise, VALLENFYRE took the challenge to make another album that sounds more Swedish than the most typical Swedish Death Metal album, with a more massive production than that of their debut. They pretty much succeeded in both cases – "Splinters" has a more "meaty" guitar sound, more organic and powerful sounding drums, lots of massive guitar feedback parts and an overall more powerful atmosphere, which is a step forward for sure. The problem is that the album sounds like much more effort was invested in the production than in writing memorable songs. After a bunch of listens, all I could remember from this album is the fact that it has a rather sinister sound, some cool CELTIC FROST worship hints and that’s pretty much it. "Splinters" doesn’t stand out among what myriads of other Death Metal bands offer nowadays, except for the fact that they were smart enough to avoid using the services of Dan Swanö, which ruined the potential of many well composed Death Metal albums in recent years. When all is said and done, "Splinters" is not a bad album, but neither is it a very good one. It can satisfy the needs of a die hard fan of the genre, but if you are looking for something much above the average, you will have to keep looking further. www.vallenfyre.co.uk, www.facebook.com/vallenfyre, www.centurymedia.com