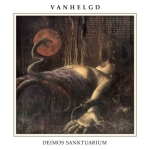 VANHELGD is a well-known act in the current extreme Metal community that continues working on new releases, mainly full-lengths of pure Swedish Death Metal madness. They have just released their new album entitled "Deimos Sanktuarium", the fifth one in their entire career, on Pulverised in co-operation with Dark Descent Records. ‘A Plea For Divine Necromancy’ is the first track here, a simple slow Death Metal composition that gives you some clue about the entire production. I have heard this album several times during the last few days and the final result is not completely satisfactory to me: I miss some uncontrolled chaotic performance. This is closer to Death / Doom territories than pure unstoppable Death Metal brutality in the way I enjoy the most. No complaints about it, but the album is weak in so many ways. As was said, here we have some problems with sound matters: this is overproduced to me, especially the drums. Add to that the album is a bit plain. Don’t get me wrong: the music is not bad here, but I really think some of the compositions could be developed in a different way, oriented to some faster passages instead of staying in the mid-paced patterns excessively. A direction change is not intrinsically bad, but I’m a bit shocked when I contrast what they did on their previous albums with this new stuff. Maybe I will change my mind in some weeks or months, but right now I consider this one the weakest one in the VANHELGD discography. Follow them at www.facebook.com/vanhelgd and if you have heard the promo song on YouTube and enjoyed it, get one copy at www.pulverised.net