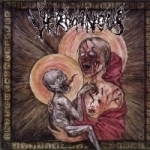 Filthy Death / Black Metal remembering the days of cut and paste layout and xeroxed demo covers from Sweden. Even their website is designed that way which is really cool – at least for me, hehe! These guys play as if Gothenburg never existed, so to say. They started out as DELVE, who released a demo in 2002 as well as the MCD “The Dead Amongst” and now returned as VERMINOUS to pollute the world with blasphemous and insane old school madness with an approach that is more in the line of acts like GROTESQUE and early SLAYER than NIHILIST or DISMEMBER. Titles like ‘Chanting Of Ghouls’, ‘Grotesque Visions’ or ‘Of Evil Blood’ give you an idea, right? The productions could be a bit dirtier and with more feedback for my taste but it is good anyway. I do not think anything has been triggered here, so VERMINOUS are closer to their influences even in that aspect. As I have only received a copy with a promotional leaflet there is not much I can tell you about the package apart from the cover which shows a putrid screaming madonna with an imp – like creature in her arms… no flowers and poetry here, need I say that? Sometimes the riffing is slightly similar to KAAMOS at times. This could also be interesting for people into NIFELHEIM or for example SUICIDAL WINDS and all other blasphemists who like it unpolished, dirty, black and relentless! In my opinion KAAMOS and SADISTIC INTENT are still better (as they were mentioned in the info) but be sure to check this band! Contact VERMINOUS: c/o Andreas Johansson, Avägen 14, 29638 Ahus, Sweden, e-mail: info@verminous.com, website: www.verminous.com.