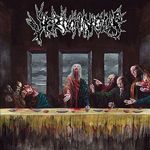 When I was watching the VERMINOUS show at Kiltown Deathfest 2012 I thought that it would be really cool if those guys would record a new album. Fortunately they did and the result is overwhelming. Exactly ten years after the killer debut "Impious Sacrilege" those Swedish ghouls unleashed its successor called "The Unholy Communion". And I’m really pleased to tell you that this album is even better than the crushing debut. Not much changed in all those years, they just brought everything a step further. VERMINOUS still delivers vicious, ripping old school Death Metal, but they are not just another ENTOMBED / DISMEMBER clone. Their sound has nothing to do with that typical Swedish Death Metal style, it’s more a powerful and blasphemous mixture of early European and early US Death Metal. VERMINOUS’ sound is closer to KAAMOS and DEGIAL than to any other of their country mates and so they are much darker, more wicked and harsher than the average Swedish Death Metal band. Apparently they improved their songwriting abilities without getting rid of its rawness, diabolicalness and brutality. Each of the 9 unholy compositions is an awesome, well arranged and well played hymn of darkened Death Metal supremacy. VERMINOUS clearly beats the pants off most of those new old school bands which are around nowadays although most of them are pretty cool. "The Unholy Communion" is just a notch above most contemporary releases. So don’t hesitate and get this masterpiece at once. HAIL VERMINOUS!!! For all further information check out www.verminous.com, www.facebook.com/hordesofvermin, www.xtreemmusic.com