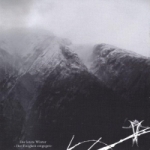 Christoph Z’s Dark Ambient / Black Metal project Vinterriket has found a new home in Displeased Records and within the next months they plan to re-release some albums from the dark times of these obscure project (some of them are already available – Frank). “Der letzte Winter” was originally recorded in 2005 and as far as I know only available on strictly limited 1000 copies through Flood the Earth Records (USA). All people who own one of the several Vinterriket releases will not be astonished if I confirm that progress on a musical basis is still not Christoph Z’s most ambitious plan. He is again trying to further emphasize the difference between black and white, grey and light white, dark night and dawn etc. by using Dark Ambient parts / songs / fragments in contrast to harsh Black Metal songs. During the 60 minutes the contrast is present and if you’re interested in bands like Uruk-Hai or Paysage d’Hiver they will / can become a trip from light valleys to the darkest mountain top. Nothing new but next to Vinterriket 2003 release “Winterschatten” their best release and for every fan worth investigating. www.displeasedrecords.com, www.vinterriket.com