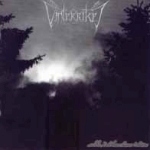 VINTERRIKET the second. “Und die Nacht…” is the debut album from 2002 and now also re-edited in a remastered version with completely new layout. As you might know in the meanwhile, VINTERRIKET’s music is kind of a soundtrack to journeys within the winterly nature. Ambient music consisting of keyboards and synthesizers mainly / only. What else can I say what has not been said in the “Lichtschleier” review? CZ has for sure improved his skills and equipment from this debut album to the fifth album “Lichtschleier”, he became able to work out his song- and sound-structures better. “Und die Nacht…” is not a bad release, but in comparision to “Lichtschleier” you definitely hear which one of the two is the debut. This version here comes also with a bonus-track called ‘… Und Donner durchflutete die Täler’. www.vinterriket.com, www.displeasedrecords.com