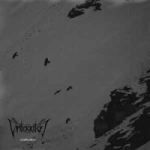 VINTERRIKET might be known to some of you who are also into ambient styled music. VINTERRIKET is a one man project that is around since 1996, but started to release anything not before the first demo tape in 2000. Since that time CZ, the man behind this project put out a huge number of releases and became some kind of institution when it comes to ambient music. “Lichtschleier” has been CZ’s 5th album and is now re-edited by DISPLEASED RECORDS in a remastered version with completely new layout. As one might already assume, VINTERRIKET tries to catch the winterly atmospheres by huge keyboard and synthesizer soundscapes. And this way also goes “Lichtschleier”: slight melodies falling like light snowflakes onto plain keyboard-carpets is the formula and it works. VINTERRIKET is an appropriate soundtrack to a daytime journey through a winterlandscape. A bit sad that it never becomes night-time, for that VINTERRIKET is not dark enough, but does someone really care?! This re-release contains a videotrack of the title-track, which is quite nice done and shows filmed sequences of winterly landscapes and mountains-sides. www.vinterriket.com, www.displeasedrecords.com