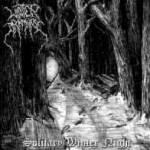 Standard riffing, standard vocals, standard lyrics and layout, this US Black Metal band that was formed out of the smouldering carcass of THY INFERNAL (their 2nd album "Warlords Of Hell" is pretty good!) is not either very bad or very good, it’s just another case of superfluous mediocrity. BURZUM, JUDAS ISCARIOT come to mind, as well as most other raw mid 90s Black Metal cults that emerged from the ungodly Northern shores. WINTER OF APOKALYPSE celebrate this overdone style to 110% and should satisfy total die-hard fans of this genre, but when I contrast them with acts like FUNERAL MIST, WATAIN, ARMAGEDDA, DEATHSPELL OMEGA, ONDSKAPT or GRAND BELIAL’s KEY the thought that an ordinary Norsecore-worship is not what I want to hear anymore. Of course I like this style, but is there really a need for another band resembling it? But enough verbal bashing at this band, for at least production-wise "Solitary Winter Night" is excellent, but being spoiled by some very inspired and inventive albums lately WINTER OF APOKALYPSE remain a pallid, yet absolutely solid act, thus I recommend giving them a chance, but you should not expect any surprises. Sounds at www.moribundcult.com.