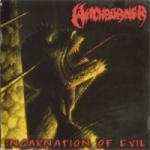 Third album, third line-up… It seems Germany’s WITCHBURNER are still struggeling when it comes to a steady solution of the involved musicians. But all that obviously didn’t really affect their musical path as guitarist Simon Seegel (the only remaining original member nowadays) luckily managed to keep the spirit of the band alive, so that "Incarnation Of Evil" has once again become another true-to-the-bone old school Thrash Metal outburst. Unlike the majority of retro bands that are around these days, WITCHBURNER always managed to sound very honest in what they’re doing. Their compositions still deliver the same feeling, atmosphere and production as the old Thrash Metal classics from the 80s, without the usual pathetic overtones that many releases of this kind come up with these days. WITCHBURNER don’t give a fuck about trends and will probably still play this raw and energetic form of Thrash when all the stupid bandwaggon hoppers have already jumped on the next fashion train on the way into nothingness. The ten new songs on offer here will easily appeal to everyone of you out there who stills worships the early releases by SODOM, KREATOR and the likes. Yes, it’s mainly a rather typical form of teutonic steel that these guys are obssessed by, but as long as they deliver it in such a fine way, I have no problems with that. And with the exception of the album closer ‘Metal Warriors’ (a supposed to be true Metal hymn-like tune, with a chorus full of unnecessary and kinda stupid lyrical clichés), there’s nothing to complain about here. Even the picture collage inside the CD booklet looks very 80s like. So, if you still get excited while playing all your old records, you better make sure to get yourself a copy of "Incarnation Of Evil" as well. www.witchburner.de.