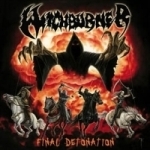 It’s unbelievable how many releases this German five-piece has been unleashed by now… apart from the regular albums a lot of them weren’t even recognized by me. There’s various EPs, split EPs, a picture disc 10″ and so on… And their next, fourth full length “Final Detonation” is also already ready to hit the stores again (release date: October 24, 2005). It may sound a little harsh, but the new material is still as unoriginal as you can get in every aspect. Musically the whole record just quotes riffings and songstructures from almost every Thrash Metal classic that has been released back in the 80s, starting with the more obvious ones by DESTRUCTION, KREATOR and SLAYER, but if you listen more carefully you’ll also recognize early SACRIFICE, POSSESSED and the likes here and there. WITCHBURNER combined all that to their own form of Teutonic Thrash and added a bunch of rather infantile and full of cliché type lyrics to it, that are always based on the wellknown mottos “Bang that head that doesn’t bang!” and “We spit on those who chose to pose and thrash with all the rest!”. In song number 5, ‘Thrash Till Death’ they even created the lyrics around wellknown album- / songtitles (“Darkness Descends”, “Fistful Of Metal” etc.). The angry vocals come across like a mixture of Jeff Walker (circa “Heartwork” era CARCASS), mixed with Tom Angelripper (including the very strong German accent) and a lot of Schmier – like high pitched notes, while the production totally delivers the raw old school feel that a lot of the 80s classics made so enjoyable. The result is one of the most old school sounding Thrash releases for quite a while (not even DESASTER sound this dated!) and you know what? I like it alot (nevertheless)! There’s millions of Black and Death Metal soundalikes around these days, so where’s the problem in coming up with a pure Thrash Metal record for a change, as long as it sounds this dedicated and energetic. Mission accomplished I would say… Contact: witchburner666@web.de