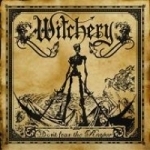 I’ve crossed paths with WITCHERY material when they released their "Dead, Hot & Ready" ’99 album and right from the first glance I considered them to be a third rate Thrash, poorly attractive or even hard to spin twice in my player. Two albums after that they continue to be as sterile as before but the only diffence now is that they don’t play their "brand" of Thrash anymore. It’s really hard for me to point out any positive elements other than the production is just perfect but that’s it, WITCHERY’s boring mid paced songs drag you from almost falling asleep to the edge of unconciousness. By swallowing the whole album several times in order to comply with the task I think that I "learned" to like a little bit songs like ‘Plague Rider’ and errrrrrrr… mmmmmmm… only that one! It’s a fact that beyond what they do in WITCHERY they are good musicians that were part of prominent bands back in the early / late 90s like SEANCE, SATANIC SLAUGHTER, MERCYFUL FATE but getting together and putting together recycled average riffs does not help in their musical careers too much. If you are looking for a good investment of your hard earned money get away from this at all costs. Visit the band at the century media site.