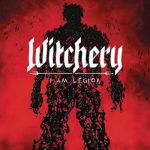 One year has passed since the release of WITCHERY’s sixth full-length album, "In His Infernal Majesty’s Service", but it sounds like they have had enough time and inspiration to write and record another one, so "I Am Legion" brings us their blackened Thrash Metal once more. They have the same renewed line-up of the previous album, so the axes-section formed by Patrick Jensen, Richard Corpse and Sharlee D’Angelo are still flanked by the drummer Christopher Barkensjö (who lately did a great job with LIK, but I still dig him for the drumming in REPUGNANT and KAAMOS!) and the screamer Angus Norder. Stylistically, the combo from Linköping hasn’t changed a bit since their early works, as "Restless & Dead" or "Dead, Hot And Ready", so you will not be surprised if you’re waiting for some ’90s Thrash Metal with Black Metal screaming and Heavy Metal leads. The intro ‘Legion’ instantly reminds me how much SLAYER were influential for all the generation of ’90s Thrash Metal bands (obviously also Patrick Jensen and his THE HAUNTED) but it abruptly ends and the real opener starts: ‘True North’ (for which Niklas Sundin directed a particular video clip) is an epic and catchy, very good mid-tempo track, dedicated to their cold land. At this point, there are three songs that don’t catch my attention, maybe in parts ‘Of Blackened Wing’ for the punkish CELTIC FROST vibe, then something different happens with ‘Amun-Ra’, where the Swedes show how to play fast and aggressive. The rest of the album flows without strokes of genius, for example ‘An Unexptected Guest’ is what I mean when I think of a boring song. Luckily enough, the last track ‘The Alchemist’ raises the quality of the songwriting again, with a furious drumming by Barkensjö and SLAYERish guitar solos by Jensen and Corpse. The two bonus tracks ‘Ragnarök’ and ‘Apex Ghoul’ (featured in the CD version only) are, again, nothing special. ‘I Am Legion’ is not a bad album, and WITCHERY are great musicians, but it doesn’t keep the pace with the previous chapter of their discography. More about WITCHERY at: www.facebook.com/officialwitchery, www.centurymedia.com