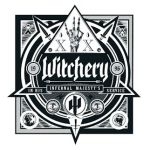 WITCHERY didn’t really latch on to me, when they first started and released their debut album "Restless And Wild" in 1998, SÉANCE gone thrashy blackened Heavy Metal, I’d rather have had some more SÉANCE. Though a lot water went through the river, and we were suddenly writing 2001 and I got stuck on "Symphony With The Devil", the band’s third full length, and after that the earlier releases also started to grow on me. Now 16 years later, WITCHERY is ready with their 6th studio album, 6 and a half years after the last one was released, the dark thrashing "Witchkrieg". The core of the band is still Sharlee D’Angelo, Patrick Jensen and Richard Corpse, who are joined by the two newcomers to the band, drummer Christoffer Barkensjö and screamer Angus Norder. While the band was going a tad darker than usual on "Witchkrieg" we are back on a full fledged thrashing Heavy Metal attack on this album, ripping riffs that catches on as soon as they leave the speakers, and quite catchy melodies and hooks, something I like about this style, and then the riffing is damned aggressive. Barkensjö’s drumming fits quite well into the universe of WITCHERY, both fierce and in your face patters and more laid back and groovy pieces when needed, and some hypnotic percussion for when the music goes dark and transcendent. I also like the new screamer, he is again a fitting match for the fierceness of the music, and the darker more atmospheric passages, and he puts his own touch to the atmospheric output. With this album WITCHERY justifies the 6 years of release silence, as they are as strong as ever. If you ever had been bitten by the bug, this is for you, and all other maniacs into atmospheric thrashing blackened Heavy Metal. The album won’t go over in history, but it’s solid with some quite good songwriting and catching tunes, and many sing along parts – it will be killer to experience this live! Ride on the wind for more info here: www.facebook.com/officialwitchery, www.centurymedia.com