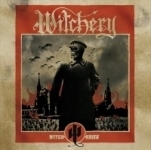 Four years have passed with not so much as a peep out of WITCHERY. Now they’ve returned, with an enormous change in personnel. Legion, best known for his contributions to MARDUK, is on vocals. His voice remains undiminished in ferocity after all this time, but it doesn’t sound anything like his old self. If that rings warning bells for you, let me remind you that this isn’t MARDUK, it’s some totally different. Legion would sound very out of place indeed if he tried to sing Black Metal vocals for Thrash Metal songs. Not only is Legion present, but so are guest appearances by towering Metal icons like Kerry King, Lee Altus, Gary Holt, Jim Durkin, Andy Laroque, and Hank Sherman – all of whom provide guest solos. Sherman and Laroque in particular make their presence known by transforming the songs they appear on into MERCYFUL FATE and KING DIAMOND songs, almost making it seem like WTICHERY is the guest, not the other way around. The new album is a suitably ferocious effort for a band like WITCHERY. Newcomers should find the album an appetite-whetting experience. Long time fans may note that some of the raw bite on the Necropolis albums is somewhat diminished. Good stuff (… and I bet my ass that the rather provocative cover artwork / digipak design, all in true WWII fashion, will piss several people in Germany off again – Frank). All further info you’ll probably find at www.myspace.com/witcherytheband or www.centurymedia.com