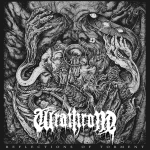 For those who might be encountering WRATHRONE for the first time, they formed in Finland, thy cold and morbid northern land in 2008 and so far have released a pair of EPs (“Burning Hatred” in 2011 and “Left Unburied” in 2013) and a debut album “Born Beneath” in 2016. WRATHRONE strikes lethally this time with “Reflections Of Torment”, which was released in collaboration with Satanath Records (Russia) and The Void Records (Italy), with vinyl and tape editions projected for release in September by Cimmerian Shade Recordings (USA). It’s easy to get a hint of the sort of Death Metal these barbarians prefer by gazing deeply at the new album’s cover art, created by Pierre Perichaud of Business For Satan. And here you’ll get a further vivid sign by just exposing to the initiator ‘Throne’. “Reflections Of Torment” shows a whole new side of the band, whereas their previous record was straight forward and pummeling kind of blasting and torment, the new album takes to the rotten level and adds obscenity and bestiality into WRATHRONE’s music. If any particular band’s sound came close to describe their music that would be ENTRAILS, but more in depth and Finnish. The ominously catchy melodies, goosebumping riffs from the netherworlds, howling and guttural progressions and darkness infested brutality all sums up this creation from initiator ‘Throne’ to the ending ‘By Dawn They’ll Hang’. The engrossing and potent musical skills and song arrangement manifestation of the souls behind WRATHRONE is truly praiseworthy and absolutely Finnish to its core. This record is a definite recommendation for fans of old AMORPHIS, BOLT THROWER, DISMEMBER and 90s Finnish Death Metal. Find out more about the band at www.facebook.com/wrathrone or visit their label page: www.satanath.com