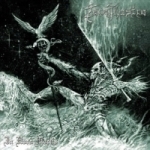 I follow this German horde since their very first album and I can only say their evolution has been really impressive. From raw Black Metal, going to a more thrashy style and finally aquiring some Swedish influences on their previous EP, "Contempt", recorded at Necromorbus Studios in Sweden, and which included a great cover of the German Thrash cult act POISON. This time they’ve chosen the same studio again, so the sound of this recording reminds, again, a bit on the sound of bands like WATAIN or ONDSKAPT, but without any doubt the main reference here is DISSECTION, which already was on "Contempt", but not as much as it is now. I could even say this is one of their best heirs. Anyways, this is not the next copy of Swedish masters of Death / Black Metal, this is a really good album, full of some of the darkest melodies you’ve ever listened to, with a lot of tempo variations, from the fastest ones to magical mid tempos with charming riffs. Furthermore Mersus delivers his great blasting and intelligent drumming on each of the songs again. The album has only seven tracks, the first one being an intro, but you’ll realize this is not an EP when you see the shortest one lasts more than five minutes, and the others being between seven and eight. Going back to the production, they did a good thing choosing Necromorbus Studios for these last two releases, as this sound just fits perfectly to their music, it couldn’t be better, believe me. It is clear, powerful and still sounds dark and brutal as it should be (although perhaps I still prefer the athmosphere of the previous EP); the vocals sound like they’re coming directly from hell, but how could this not be like that seeing the previous work of this guy on the albums of FUNERAL MIST, ARMAGEDDA or WATAIN? Finally, not to forget, is the cover, done by one of my favourite cover artists in the Metal scene, Mr. Kris Verwimp, who has done a very original and unusual drawing for his typical "epic" style. So, fans of Swedish Black Metal, you’ve got a good one here, and this time coming from Germany. Check this band out if you don’t know them yet, you’ll be surprised. www.agoniarecords.com