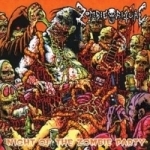 These Japanese Zombie addicted sickos started out back in the Spring of 2003 and go by the cute names of Dr.Hatred (vocals), Alcohol (guitar), Vlood (guitar), Eucharist (bass) and GxSx (drums). Except for Eucharist, who got fired rather quickly due to his laziness, the line-up has been steady ever since (Vlood just switched from guitar to bass). When it comes to their pre-album recordings, only one 3-song demo CD-R called "Fast And Alcoholic" reared its ugly head in October 2003, of which all of the songs ended up on "Night Of The Zombie Party" as well now. At first I was a little sceptical whether I should take the band really serious or not… not only because of the names they had chosen for themselves, but also because of their rather B-movie type image and the fact that all of the twelve tracks on the record have the word "zombie" in the title. ‘Zombie Ritual’, ‘Zombie Fire’, ‘Zombified’ and so on… I really wonder if they try to continue on with this in the future… But luckily the music proved me wrong, to say the least! I was honestly pretty much blown away by the excellent songwriting and the band’s overall raw old school feel. If you associate ZOMBIE RITUAL with old DEATH because of the bandname, you’re not completely thinking in the wrong direction. Some of the riffing indeed recalls the "Scream Bloody Gore" / "Leprosy" era, while the main vocals are more in the sick Chris Reifert (ex – AUTOPSY / ABSCESS) vein. But there’s also an additional, more hysterical voice, elements of grinding Death Metal (the old Scandinavian way), as well as classic American 80s Thrash, which altogether results in an extremely convincing mixture. The songs are straight forward, rather catchy (due to the memorable choruses), partly doomy, but always very intense and spiced with some great guitar leads. Even the production comes across very professional and is the icing on the cake as it easily recalls the sound of older classics (so luckily no digitial drum sound here!), while the gory comic type coverart perfectly fits the band’s overall concept. So, all in all this is a highly recommendable, very impressive debut! More info at http://zombieritual.com or www.razorbackrecords.com