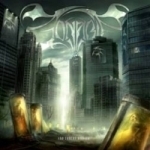 One of the main candidates for the newcomer of the year is for sure ZONARIA. Their first album “Infamy And The Breed “had been one of the best debuts for years and – even if it had been released over a year ago – it’s still an essential part of my ‘Bang your head wake up Metal collection’. After the release of their debut they changed to a major record company which wasn’t a surprise taking into account their enormous potential. What could be expected from the “The Cancer Empire”? First of all a far better sound which is giving their Death / Black Metal hybrid an enormous power thanks to our Swedish friends from Studio Fredmann. Musically the changes are quite limited; it’s again a 45 minutes bloody massacre without any survivors. Going more into detail it seems that the band lost nothing of their brutality but the sheer aggression had been exchanged with higher musical skills. The still extremely young band had been on tour several times during the last 15 months (with PAIN and VADER) and the new songs still living from their brutality but the different parts are working more closely together. Especially the guitars and the supporting keyboards are standing “side by side” to further increase the musical assault. I think that ZONARIA are one the big hopes of this genre even if their record company is gambling around with a lot of other bands to attract potential buyers. The Swedish band don’t need this support they had and still have their own, fresh approach and I’m really looking forward to the live presentation of the new songs (on the forthcoming SATYRICON tour) – so see you there to celebrate the rise of a new musical antichrist. www.zonaria.com, www.centurymedia.com