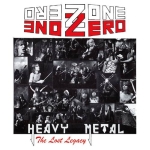 Another "let’s release all what we have" kind of compilation. While sometimes albums like that are interesting for die hard fans and collectors only, and it’s hard to survive the entire release from the first to the last track, in case of ZONE ZERO it’s a bit different, as this Swedish act had really great songs, builded around really terrific riffs and melodies. So yes, we have some live, rehearsal and demo recordings here – so something without the usual studio quality – but actually it’s a real pleasure to listen to them. ZONE ZERO is a bit forgotten these days, but their songs have quality comparable to cult acts such as Swedish HEAVY LOAD and GOTHAM CITY, or Danish WITCH CROSS and MIRAGE, so it’s really cool that someone finally decided to reissue their anthology. Double CD, lot of recordings from 1981, 1982 and 1983 – the only minus of this release are the newer tracks from 2004 and 2008, recorded with a drumming machine. But well, we don’t have the "skip" button on our CD players for nothing, right? All in all: a very good release, big kudos to Shadow Kingdom Records. More information: www.facebook.com/pages/zone-zero/175117532529571, label: http://shadowkingdomrecords.bandcamp.com