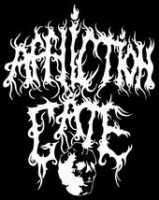 They came out with an EP entitled “Severance (Dead To This World)” in 2008. And what a record it is! Three songs (and outro) of pure oldschool Death Metal in the vein of the old masters, both in spirit and execution. AFFLICTION GATE is hailing form France, a country that has, in the past, spawned some of the Death Metal masterpieces and I think that soon we will talk about another one! This stroke me as possibly the best newcomer stuff for the last year so I have contacted Grief for a brief interview about the band…


Tell us how AFFLICTION GATE came into being?
“AFFLICTION GATE was born by the gathering of JP, Herostratos and me in Spring 2006. We are 3 long times friends and Metalheads, so we just thought it was time to start a band together finally with the aim to play oldschool Death Metal as it used to be in its glorious era back in late 80s and early 90s. A style which is not popular nor represented for over a decade now in France, by the way.”

What is the meaning behind your band’s name?
“The name AFFLICTION GATE means a path of no return and of severance to reach strength and freedom through despair and death. It’s Herostratos who came up with this name being the symbol of our dark perspectives.”

What got you into Death Metal? Why did you choose this musical genre for expressing yourself?
“Thanks to a friend of mine (who was also a school mate) I discovered Death Metal during the year 1991 with those cult stuff that he lent me: DEATH “Scream Bloody Gore”, OBITUARY “Slowly We Rot”, MORBID ANGEL “Blessed Are The Sick”. It appeared that Death Metal had the strongest impact on me among all other Metal styles I used to get into since the late 80s (Hard / Heavy / Speed / Thrash) as the more I listened to it, the more it gave me the motivation to learn to play guitar and to become a musician. Finally, I started my first band back in 1993 but it was just a local band but we had our own tracks and we were playing a couple of covers as well. No demo was recorded nor did we play gigs, though. The band existed for around 1 year. I was young (16 years old… while I’m 32 now !), however, I still remember about this time with pleasure and it was a cool experience to begin with. I even “exhumed” a song which I composed back then to include on the upcoming AFFLICTION GATE album but of course, this is not exactly the same version as it formerly was: it has been re-worked and also re-arranged on some parts. Anyway, this song suits very well because my influences were already stuffs as UNLEASHED, ASPHYX etc… I guess I never evolved as a musician!!! (laughs)” 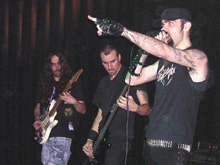 When speaking about your music, fans mention almost full spectrum of oldschool Death Metal bands. What are your strongest music influences?
“Yes, I noticed that various names were mentioned about our music: some I agree, some I don’t really get the point (especially when some speak about possible Black Metal inspirations!) but I guess it’s a matter of own interpretation which belong to each listener. Our main influences come from the early masterpieces of UNLEASHED, GRAVE, ASPHYX, BOLT THROWER, DEATH, MORGOTH, MASSACRE, BENEDICTION, DISMEMBER…”

What is, in your opinion, the state of Death Metal scene in France nowadays? Any bands you would like to mention?
“Unfortunately, the Death Metal scene in France is mainly a matter of technical and blast beats oriented bands… I really feel nothing when I listen to this kind of stuff. It seems that nowadays people think there’s no other way to play Death Metal which is due to a trend effect. Oldschool Death Metal is a very underground minority here but we have some really promising bands like BRUTAL REBIRTH, ZOLDIER NOIZ, NECROWRETCH, RITUALIZATION… who all deserve more attention.”

You have already received a lot of great reviews. Have you been prepared for this?
“Honestly, we didn’t expect to get such a very positive feedback for our very first effort. We were completely unknown and we really got lucky to release our EP on a label in such a fast way. It’s great to see that lots of people, webzines / zines (even some mags)… around the world enjoy our music and support us!” 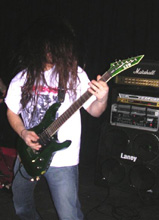 Your EP “Severance (Dead To This World)” for sure produced some hype. I guess that is a strong motivation for you. When can we expect a full length album?
“We have just booked the studio for the recording of our debut album that will happen in August. We are also looking for a new deal. We would like the album to be out for late 2009 but it will depend of the label that releases it in the end , obviously. In spite of the amazing reviews, we are aware that the EP was just a first step and that we still have to work and also improve our sound. We will enter a professional studio this time as we plan to get a more crushing, powerful and heavy sound / production but we will avoid polished, modern stuff and trigged shits! We have also tuned our instruments much lower now. The EP is, however, really satisfying for a very first recording and a “demo category” stuff.”

Tell us something about the musical and lyrical concept of the forthcoming album? Do you already have a name for the album?
“All songs have been composed and we are working on them in rehearsals at the moment. It’s titled “Aeon Of Nox [From Darkness Comes Liberation]”. It will feature 7 tracks + 1 outro. Musically and lyrically, it’s the logical continuation of the EP.”

Although I have heard only a few of your songs, I must confess that they stroke me as having a sort of “visionary” quality. What vision would you like to communicate to your fans through music?
“I guess visions of death, war, despair and darkness are those that come to mind immediatly when someone listens to AFFLICTION GATE. The specific atmospheres we create by using intros on each song helps to define and set the right mood too.”

Your cover art for “Severance…” is really good and goes great with the music itself. Could you tell us who did it and how it came about?
“Nicolas Solieri (ex-MORBID UPHEAVAL, Italy) did a perfect job, as usual for this skilled underground artist. The artwork is linked to the band’s name and also to the title (even if this one was chosen after the drawing). It represents a gate where souls are willing to accept the consequences of solitude, despair, subversion and mind’s deliverance. Cross the threshold and come die in pain with us: the resurrection will set you free from the corrupted and vulgar virtues of this world.”

Apart from music, where do you draw your inspiration from?
“As a composer, my aim is to play in the vein of old bands & albums that I worship and thus to capture the same feeling and atmosphere so I can hardly speak about unmusical influences in my own case. On the other hand, concerning the lyrics, Herostratos can be inspired by different things such as personal experiences and state of mind, books (philosophy, religion etc…), TV and movies, newspapers etc… All that is related to the dark side and the mankind’s twisted nature.”

One thing I am always interested in: playing live vs. studio playing. How are your fans reactions on concerts?
“We played live 3 times so far and it’s a fact that the catchy and “straight to the point” Death Metal we are playing is really build for live conditions. Live is raw energy while studio is much more “controlled & detailed” work so, 2 different situations to illustrate a same essence, so to speak. Our best gig was with the Black Metal band from Italia: IMAGO MORTIS. All the perfect conditions were gathered for a killer gig: excellent venue and sound, very good reactions of the crowd, cool bands to share the bill with. More gigs in France should happen this year. We hope to play in other European countries soon too!” 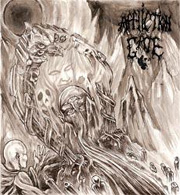 Where do you see your band a few years from now?
“Still alive and kicking! This band is very important for us so, we feel really motivated to raise the flag of oldschool Death Metal as long as possible!”

And now one serious question: what is your idea of fun?
“Actually, we very much like to have fun: we are just a bit more mentally disturbed compared to the usual guys walking in the streets! (laughs) I like the dumbest form of humour as much as the most politically incorrect, cynical one! No limit!!! (laughs)”

Thanks for the answers! Feel free to add one last personal stamp on this interview!
“Thank you very much for giving us the opportunity to be a part of VFTD. Your support is truly appreciated. Take care and cheers !”