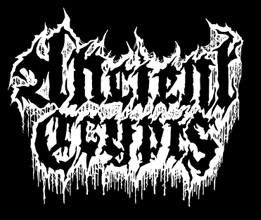 Chile’s underground Death Metal scene has been thriving for the last 6 – 7 years now, with a bunch of excellent bands and releases. It seems all eyes are set on this South American country. And ANCIENT CRYPTS is one of those Death Metal bands that have hit hard in the underground. A somewhat recent outfit, formed in 2012, they released a promo tape in 2013 and then, a few months after that, their "Devoured By Serpents" demo tape. The latter got re-released on vinyl, tape and CD on three different labels. So yes, that says a lot about their material. We managed to contact Nyarlathotep (guitarist, vocalist and founding member) and he kindly answered to our questions.

Hello Alejandro, how are you doing? Welcome to Voices From The Darkside and thank you for this interview. I know the band started as a two piece, with you and Skullfuck recording the "Promo 2012 A.B." and then the "Devoured By Serpents" demo tape. They were both released in 2013, with a 6 month difference. How were these recordings received in the local and international underground? Specially, since there was such a short time between them.
"Hello Alfonso and thanks for interviewing us. The reasons why the first promotional release and the "Devoured By Serpents" demo tape were released with such a short time between them was because we originally recorded the complete "Devoured By Serpents" demo in Etagord Studios and part of that recording is what we released as the first promotional tape. We were lucky enough to receive offers from several record labels and we decided on Iron Bonehead Records. Also, right before the demo tape was released, Mushantufe Productions contacted us because they wanted to release the demo as a CD version and paid for a better recording in DM6 Studios in which I had already recorded some stuff with UNAUSSPRECHLICHEN KULTEN. So we did everything again in a different studio and that’s how the "Devoured By Serpents" demo tape came out. As far as I’m concerned, we were well received. I thought we were only going to release a small promotional and we ended up working with two, in my opinion, awesome labels. And our demo ended up on CD, tape and vinyl." 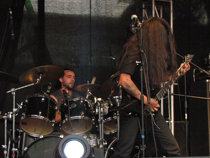 How did you achieve the sound on both of your demo tapes? As you look back, are you satisfied with how they came out.
"As I said before, the sound of the promo was achieved in Etagord Studios and the "Devoured By Serpents" was achieved in DM6 studios. I’m very satisfied with the final recording, especially with the mix that we used in the vinyl release; it ended up just like I imagined it to be in the first place, it’s always great when you end up doing stuff exactly like you pictured it in your mind."

Dead Goat came into the fold in 2014. He and Skullfuck are also members of INVINCIBLE FORCE and you were part of NUKLEAR STRIKE and UNAUSSPRECHLICHEN KULTEN. How has your collective experience influenced the sound and concept behind ANCIENT CRYPTS?
"I think that being able to play in a band with much more experience (UNAUSSPRECHLICHEN KULTEN) helped me a lot to achieve our current sound and concept. There’s a lot of stuff that you can only figure out through experience when it comes to the creation of a band. I think our collective experiences have helped us to understand those kind of things." 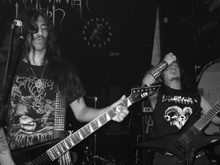 Since ANCIENT CRYPTS is your main band, I am guessing you write all the music and lyrics. Do the other members have their input when it comes to composing your material? What inspires you when writing the lyrics for your songs?
"The "Devoured By Serpents" demo was written entirely by myself. And the cover concept, which was later executed by Alexander Brown. Nowadays, there’s more input from the other members of the band. But I feel more comfortable if I’m in charge of the musical composition, which in my opinion, is the most entertaining and satisfying part of having a band. The inspiration for the lyrics comes mostly from stuff I read, like H.P. Lovecraft or archeology, or stuff I see in graveyards or hallucinations."

Which bands do you think influenced you the most when creating material for ANCIENT CRYPTS? Do you set yourself in a certain mood or just wait for inspiration to hit? And how has this process worked so far? Do you think you will eventually change it or keep it untouched?
"There are lots of bands that influence me when I create something, and I think it’s pretty obvious in our music. I try not to sound like other bands, but I think that’s because I’m just not that creative yet. I think the bands that influence me the most are DEMIGOD, GORGUTS, IMMOLATION, ASPHYX and INCANTATION to name a few. To create something I just wait for creativity to hit me and I try to write it before I forget it. Sometimes it comes when I’m playing guitar or in dreams. So I keep collecting those melodies and adding them in a way that suits our purpose until the song feels complete. It could take me one week or one year, but I like taking my time and I try not to force things. I would rather not do any music at all than to release something I don’t feel comfortable with. I can’t say if our style is going to remain untouched. Only time will tell."

Although the band has strong roots in Death Metal, there are also other noticeable influences. I can hear a lot of Doom Metal in your songs. Did you focus in these parts as a main aspect of your style?
"Yes, I wanted to mix Death Metal and classical Doom. The idea was to play slow doomy riffs in order to create an atmosphere but also to be able to move from that onto some fast and heavy riffs. I feel that music is more interesting when there’s some variety in it."

Is the band composing new material to be released soon? Or do you take your time to work every detail and tweak every song so it comes out just as the band wants it to be?
"We are currently working on some new material but I can’t really say how long it will take us. You’ll just have to wait until it’s finished. I feel that’s how Death Metal is supposed to be. So I work on every single detail before releasing something."

Have you had your debut on stage yet? Are there any live appearances planned in the future? What can we expect from ANCIENT CRYPTS live shows?
"Yes, we have played a bunch of times in Santiago and some other cities. We will be playing in Iquique this month and in Santiago in November with PENTACLE. Our shows are pretty simple; we just play. It is Death Metal, what else would you expect?"

In my humble opinion, Chile has a "signature" sound. Most of the bands coming from your country, past and present, sound totally different from each other, but there is an inherent feeling of aggression in their sound. Do you agree with this? If so, how do you explain this fact?
"I agree with that. Chilean bands, especially the first ones that came out back in the old days, have a special vibe that’s different from other countries. I think that’s because we take Metal seriously. To us it’s more than just music or some way to entertain ourselves."

In the last, 6 – 7 years, your country has re-invented itself with many bands releasing great material oriented towards Death and Black Metal. How has the Chilean scene welcomed the addition of ANCIENT CRYPTS?
"I think the Chilean scene has received us really well and we hear lots of good comments, but does that really matter?"

"Devoured by Serpents" has been released on digi CD by Chilean label Mushantufe Productions and 12" vinyl by the German label Iron Bonehead Productions. Were you approached by the labels to re-issue the demo tape once it was sold out? And how have these two releases helped the band so far?
"The digi CD was planned before the release of the demo tape and the vinyl version was something that came out when the demo tape was already sold out. I like to see those three issues as one: you have the cassette with only the tracks from the "Devoured By Serpents" demo and the first cover which has a rougher mix. Then there’s the digipak CD with a different art cover and an extra song which is an ASPHYX cover version. And finally there’s the vinyl edition with the first cover in front and the second cover inside, with a special mix that Pablo Clares did especially for this version. I think those three releases accomplish all my expectations with the "Devoured By Serpents" overall concept." 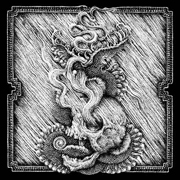 Your "Promo 2012 A.B" has only your logo on the front cover, while "Devoured By Serpents" has a pro cover with a really interesting drawing. Who comes up with the artwork and the concept behind it? And how important is the visual aspect of the band when related to your music?
"The logo was drawn by Skullfukk and I came up with the idea for the cover art. I think the visual aspect of a release is very important. You are supposed to listen to the music while looking at the cover or reading the lyrics, so you can catch the atmosphere easier. Also, the cover makes the concept more interesting and as I said before, Death Metal is not just about the music."

Well, my friend, I think this is it. I hope you enjoyed this interview. And thank you again for your answers.
"Recuerden que moriran."