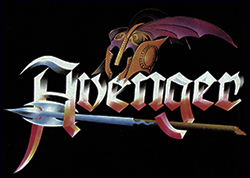 "Prayers Of Steel", the 1985 debut full length from German Speed / Power Metal masters AVENGER, has just officially been re-released on a double CD (via Dr. Bones Lethal Recordings) along with the "Depraved To Black" EP and a shitload of demo songs from the bands early days. Reasons enough for Anders to hook up with vocalist / bassplayer Peter "Peavy" Wagner, most of you probably better known as the frontman of RAGE, for a little journey back in time…


You have just re-released ”Prayers Of Steel” from AVENGER, with a lot of bonus material, more or less, all AVENGER recordings, how has that been received and has there been a great demand for them, the later years, as the originals are quite tough to get hold of?

"Yes, over the years lots of people asked for those albums, they were not available for quite long. A while ago, I got back the rights from my back katalog, so since nearly two years we’re working on re-releasing the stuff on my own label Dr. Bones. We had already some stuff out ("The Refuge Years" box and the "Black In Mind" album) which was already very successful. Now the "Early Years" box just came out and the first pressing is already sold out, we’re re-pressing. Also the vinyl versions are about to come soon…" (via www.puresteel-records.com – Frank)

Do you remember how AVENGER was formed back in the days, and what did you intend to bring the musical world with the band?
"Of course I have lots of good memories to these old days. It was very exciting and funny to start my first steps in the music world. Our intention was simply: METAL…"

What did inspire the band in the beginning?
"Our influences were of course those bands we admired back then. We were Metal fans trying to follow their idols. BLACK SABBATH, JUDAS PRIEST, VENOM, METALLICA and so on…"

How did you feel when you got your first record deal and again how was it, when the record saw the light of day?
"All very exciting! It all happened very fast in those days, too fast for us to always find the right decisions…"

There were a lot of line-up changes in the beginning, weren’t people serious enough or did the success come as a shock or what happened?
"It was not that much changes as you make it sound like. Only the position of the second guitar was changing on every album in these early days. This was only for personal reasons of the guys. Alf wanted to expand his studys, for Thomas the touring stress was too much and Rudy wanted to change the band to a more commercial project, he made the others to follow him and so I re-started RAGE with Chris and Manni by middle of 87 (the "Refuge" era)." 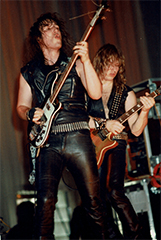 When did you feel, ”here I have the right line-up”?
"When I did the new start with Chris and Manni."

Did the intentions of the band change, when you were forced to change the band name?
"No, not at all. We just continued our work…"

You left out a few AVENGER demo tracks when compiling the re-release of ”Prayers Of Steel”, why leaving out those few tracks and not giving us the chance to have the complete legacy of AVENGER compiled on one release?
"I left out nothing! You are wrongly informed. I know there’s a lot of bullshit out in the internet, you shouldn’t believe all that. This was placed by people who were not involved and have no clue about the topic. You can trust me: I was there! Fuck those rumour spreading wannabe insiders!"

What is your favorite AVENGER tune and why?
"’Sword Made Of Steel’. It’s fuckin heavy!" 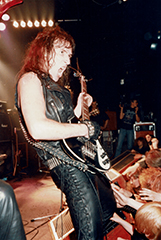 Do you think AVENGER would have developed in the same direction and developments as RAGE, if the name change hadn’t happened?
"Yes of course!"

There are a couple of AVENGER songs where I think I can hear later RAGE, especially ‘Adoration’, can you see some likeness, and did you have a course set out from the beginning, where you wanted your music to go?
"Are you kidding me? Of course you hear RAGE in it, because it is RAGE. It was just a name change, nothing more, understood?? We made our songs from our feeling, we had no bigger plan…"

How do you approach songwriting nowadays compared to the early days of your career?
"No big difference, I’m just more experienced."

What about inspiration for the music, I guess inspiration comes a lot easier for a young band / musician, compared to when you are seasoned and have quite a good deal of releases behind you, and people expect yourself not to copy yourself too much, how are you getting inspired today, compared to early on in your career?
"Bullshit! The older I get the easier is composing for me. Composing is an art where you need technique, experience, musical knowledge and of course inspiration. Inspiration is, like the word says, a spiritual thing, you find your connection to the universe, where all ideas come from. An open mind is needed, this is always ageless."

I think I can recall an old interview where you stated that you guys in the band were battling in writing the most ridiculous lyrics for AVENGER as possible, is that right? And who of you won that competition, what song do you think has the most ridiculous lyrics?
"Yes, that’s right. We were big VENOM fans and liked this Satanic fun lyrics, we never took this serious, just like VENOM. I won the contest with ‘Southcross Union’."

You re-recorded ‘Prayers Of Steel’ for the RAGE ”10 Years In Rage – The Anniversary Album” in 1994, how do you feel about that re-recording today, and why did you choose to use that exact song, for the album?
"I still like this version and I picked the song as it had the best space for the endless guitar solos from all ex members." 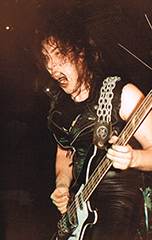 Have ever thought of doing a tour or some festival gigs as AVENGER, to have a chance to get totally into the old songs and give the audience a blast from the past?
"No. Makes no sense. If we wanna play some of these songs we’ll do it with RAGE, probably on the next tour."

How do you see and feel about the Metal scene today, compared to when you started out in the 80s?
"It’s a lot more competition today, so many bands, so many genres. Back then it was only few bands and all was Heavy Metal, from SLAYER to BON JOVI."

What do you miss about the time around the AVENGER album and the first RAGE albums?
"Nothing."

You have been releasing quite a good deal of music during the years, if you had to pick the three best songs of you career, and the album you are most satisfied with, what will it be?
"I hate those questions! You cannot break down a songwriter’s output over 35 years and 24 albums (we talk about way over 500 songs) to only three! Also that’s a matter of taste and taste changes constantly. You know the hits. These songs are important for my carreer, but if they’re the best – who can say?" 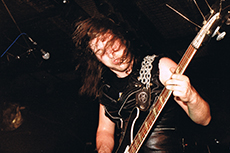 RAGE recently released the new album ”Seasons Of The Black”, how has the album been received by all the maniacs out there?
"Perfectly! We hit the German official album charts at #25, one of our best positions and an upgrade of 12 positions compared to the album before. Same in most other markets worldwide."

How do you yourself feel about the album, and what were your intentions with it, when you started writing the songs for it?
"I’m very satisfied with it. A cool collection of well composed Metal tunes, just how I like it…" 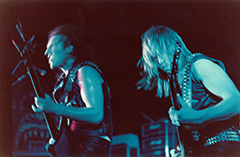 What should we read into the last RAGE song on the album, ‘Farewell’?
"It’s a part of ”The Tragedy Of Man”, a story about the extinction of mankind. Farewell is a goodbye to our kind."

On ”Seasons Of The Black” you also re-recorded five AVENGER tracks, is AVENGER rising and why so much focus on the old killer material all of a sudden?
"A coincidence. As we worked on the re-releases, Marcos and I got the idea of re-recording some of those songs, as we found them timeless and not so well executed in their original versions."

I really like the original AVENGER touch you have kept on the re-recordings and your voice, damn, you sound young again 😉 Was it the plan to keep them in the old atmosphere, unlike the ’94 re-recording, that became a tad to ”RAGE-nized” or did you just take it as it came, when rehearsing and recording the songs?
"We wanted to keep them quite original, just play them better. That’s why I even sing the original lyrics." 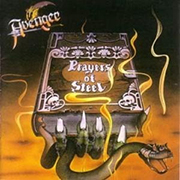 Was it nice, finally to get a decent whipping sound on ‘Down To The Bone’, compared to the quite thin attempt on the original recording?
"Ironically the original whip is on the old recording, while now we just used a sample. Back then we recorded the whip ourself, beating a metal chain on a wet blanket."

You’ve been doing some festivals this summer, did you play some of the AVENGER songs, and how did people react towards them?
"No, not yet. Maybe on the upcoming album tour, that will start in mid December."

What five albums have you been listening a lot to lately?
"Last MEGADETH, various BEATLES stuff, PAIN OF SALVATION, TRI STATE CORNER."

Thanks a lot for answering the questions, if you have anything to add, please feel free 🙂
"Thanx to all the fans for making it possible!!"