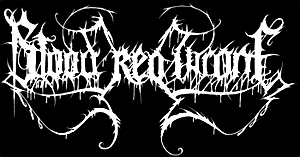 I was more or less completely hooked when I laid ears upon the demo “Deathmix 2000”, from a young Norwegian band back in 2000. What I didn’t know back then was it was the start of many years of terror and awe for the entity named BLOOD RED THRONE. I was an avid follower of the band up until around “Souls Of Damnation”, and then lost a bit of interest in Metal generally, that interest is back, and on top of that I was brought back into the circus of madness and brutality when I heard the new and self titled spawn “Blood Red Throne” earlier this year. The band started out with the passion Død and Tchort had for Death Metal back in the days, only Død, with the civil name Daniel, is left in the band today and I had a good chat with him about the new album and the band in general.


Hi there Daniel, what are you up to as we speak, besides answering this interview?
“Too much I’m afraid. Work, family, soccer, 4 bands, 500 e-mails, interviews. You name it, haha!”

You’ve been a good deal on the road the last month or so, how has it been and how has BLOOD RED THRONE been received around Europe?
“This is the seventh or eight time BLOOD RED THRONE tours Europe, but it’s only the second time we headline. We have a lot of fans in Europe, but after 15 years we still get new fans!”

Earlier this year you released your seventh full length album, to quite a lot of praise, understandable as it does kick some serious ass. Were you surprised by how the album was received?
“Not really. I always knew it was a good album. The difference this time is that we’ve contributed with the promotion and a lot more magazines, webzines and radio stations have been informed and forwarded the album. So, a lot more people know that BLOOD RED THRONE has released a new album. This has been lacking on some of the previous albums. But the bottom line is that this album is great. Simple as that.”

"Blood Red Throne" turned out somewhat stronger and more powerful than your previous effort "Brutalitarian Regime" which also was the first album without Tchort, why did Tchort stop doing BLOOD RED THRONE and what was your focus when writing songs for the new album, since it is so good damn relentless and brutal?
“Tchort decided to quit BLOOD RED THRONE after 12 years due to family and work commitments. We wrote about 50% each on our first three albums. Then I took over more and more and when he left I wrote almost all material except three songs on our last two albums. Anyway, my focus is always to make great songs and have a great balance between groove and brutality. What made the new album even more powerful and stronger might be that we’re using 7 strings guitars, but also having a new singer with deeper growls.”

You are the main songwriter in the band, how do you work when you write music and where do you find your inspiration?
“I like composing my music by myself in my home studio. It always starts with a guitar riff and I program the drums and record the riff. I kind of know immediately what drum beat to come next and then it’s much easier jamming out the next guitar riff. I like to have a structure in the song. Not just throw in 14 different guitar riffs in a row. I try to have verse, chorus and some repetition during the song. When a song is finished, I send it to the other guys. Bolt starts writing lyrics and vocal lines and the drummer works out his own fills and ideas and we try them out in studio when recording the album. It can be days and sometimes weeks before I even touch the guitar, so I guess when I have the time to play, that’s my inspiration and riffs and songs keep coming.”

Have your sources of inspiration changed throughout the years? It is no secret that you are seasoned man and have been doing Metal for quite some years.
“Well, I have been playing guitar for 20 years now. In the beginning, my friend, who made me wanted to play guitar like him, was an inspiration. Then of course, major bands were a huge inspiration and then other friends having a band or going to gigs were quite inspiring. Nowadays, it’s more in the veins and just running a band on a professional level. But it’s still as fun today to create music. When it’s not, one should stop.” 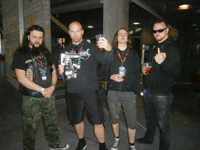 The line-up you have in BLOOD RED THRONE nowadays is quite new, are you dictating it all, or is do they others have a saying, for instance when finishing songs at rehearsals etc?
“Most songs are written by me. The rest is written by Ivan (guitar). Except from helping Ivan with the arrangements, I don’t interfere with his songwriting. Same goes for me. The others have total confidence in me as the main song writer and they know I deliver good songs. As for the vocals, Bolt writes his own lyrics and makes his own vocal lines without the rest of us telling him to do otherwise. Since some of the members live far away from each other, we never rehearse. We’re a cyberband, hehe.”

Throughout the years the band has changed a bit back and forth in its expression between heavy atmospheric, yet brutal Death Metal and all out brutality, what is the next level of progression for the band?
“Hm, I think there’s been a distinct sound from the very beginning. We’ve stuck to it and will never change dramatically. Of course, “Altered Genesis” and this new one might be the most brutal albums, but they all have the heavy, groovy and fast shit to it.”

Your new vocalist Yngve "Bolt" has taken quite some hits for his efforts on the new album, I can’t really see why, as he delivers a brutal assault with some nice twists not heard in Death Metal very often these days. Do you have any idea why the reaction towards him has been so strong, even by people liking the music?
“The feedback on Bolt has been mostly good. There will always be different opinions, some are entitled to their opinion, and some are just out there to be cool asses. Vocals are very important in every band and naturally people have their own favorites among the three BLOOD RED THRONE singers. Bolt is an confident individual and he can handle any feedback, both positive and negative as an adult. But you’re right, he certainly brings something fresh and new to the sound of BLOOD RED THRONE!”

Is Yngve handling the lyrics all by himself, or is there input from the rest of you guys and what does lyrics contain, is it plain old school Death Metal lyrics or do you dig deeper?
“Bolt takes care of all lyrics. Previous, we’ve had a lot of help from other writers, but this time Bolt did all himself. Basically they deal with all the evil and madness in the world, trying to understand and see things from a different point of view.”

The album is released as CD by Sevared Records and as a limited vinyl set by yourselves, how has the vinyl set been received by the masses?
“To be honest, I thought there would be more orders. This vinyl box is so fuckin’ smooth, I have no words. And it’s cheap. We decided to do something special for the fans and celebrating our 15th anniversary. It’s also possible to buy only the vinyl. Support!”

Are you a vinyl man, since doing a vinyl release on your own, or is it “just” to satisfy the vinyl hungry masses?
“I have about 2000 CDs and 200 vinyls in my collection. I’m not a vinyl fanatic, but I like to have older albums on vinyl. BLOOD RED THRONE did vinyl on our two first albums, so it was about time again now, hehe.”

Are you satisfied with the job Sevared Records do? It’s your second release by them, though you seem to do quite a lot of promotional work yourself, but again I guess it’s tough for a small American label to handle the European scene together with the Americas.
“Sevared has been great to us. Of course, their network and promotion is limited, but it’s hard these days and not many labels will sign artists anymore. Still, I think we deserve to be on a bigger label, and the band would have been much further in our career if so.”

Where did you obtain the brutal yet soothing sound and who handled the knobs? I really dig the production, very fitting for the onslaught.
“It’s actually the bass player in my other band, ZEROZONIC, who did the mixing and mastering of this album. He’s very talented and easy to work with. I don’t like the total digital sound of many bands of today, so we try to have a mix between modern sound, yet still some old school and organic sound.”

What made you go back to the old logo of the band on the last record, which I find great, as it somewhat more fitting for a brutal Death Metal band, than the clean logo you’ve used since "Monument Of Death"?
“Actually, we went back to the old logo on the previous album, “Brutalitarian Regime” (like I said, the last album ;)). Not only the band wanted it, but Sevared Records also demanded it when signing us, hehe. No question about it, the old school logo looks better.”

What albums have you been spinning a lot lately and did you come across some nice new music while touring?
“I get a lot of CDs from people when I’m out playing. Some of it is ok and some is not. I constantly have music in my car and I listen a bit to music at home and at work as well. I listen to a lot of music. Mostly Metal of course. I really enjoyed one of the support bands from our last tour; WYRUZ. Awesome Thrash Metal and a great live band.”

Thanks a ton for answering my questions, if you have anything to add to it, fire at will!
“Support Norwegian Death Metal. Buy the great box set at bloodredthrone.bandcamp.com and show up to party with us when we come to your town! Cheers!”