Antimo Buonnano is a quite busy man. I first stumbled over the name back in 2000 when I got hold of DISGORGE’s "Forensick" and DOMAIN’s "Hellbirth" split with DEMONIZED, all three bands featuring him on vocals, bass or guitar. DOMAIN became RAVAGER, HACAVITZ was formed, PROFANATOR was born, together with a small stint with IMPIETY and a few other bands and projects, where most of them still are active in a way or another, no rest for the wicked. The newest project of Antimo is CASTLEUMBRA, a dark and haunting Death Metal band touching the darker side of man and mind, that released their debut "Cthulu Wgah’nagl Fntagn" last year, and in that connection we hooked up with Antimo to ask him a few questions. He answered even though he is busy with the new HACAVITZ album which is about to become released by Dark Descent Records any day now, and with writing new tunes for an upcoming CASTLEUMBRA full length, and probably a few other things... 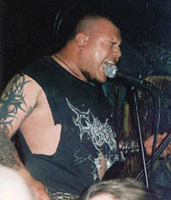 Hi Antimo, won’t you start off with a small introduction of yourselves and how you came up with the idea of forming CASTLEUMBRA?
"The original idea to form CASTLEUMBRA was just to put together some obscure ideas that Alejandro Franco (former drummer) and myself had at that time in 2007 – 2008, and to make some very dark Death Metal songs and to record a demo, and then it turned out as the debut MCD!"

What does the bandbame CASTLEUMBRA refer to?
"The original vocalist supposed to be Edgardo Gonzalez (ex – CENOTAPH vocalist, ”Ride Our Black Oceans” – “Saga Belica” era) and his concept of the name, is the name of the place Castelumbres, in Spain, that at the medevil era was the place were apocryphous “sects” and “dogmas” were formed, as the Illuminati and the Opus Dei. But he twisted the monicker with the “umbra” and “castle” words mixing them as CASTLEUMBRA…"

You have both in the band been playing / are playing in quite an array of bands, Death Metal and beyond, how did you come up with idea of making a band like CASTLEUMBRA dealing with Lovecraftian myths?
"I’ve been a long time lovecraftian follower and worshipper, and Sumerian mythology as well. I think both these concepts fit so well in very obscure music, that’s why we wanted to shape very darkened songwriting to build some blackened aura in the crypts of the Death Metal!"

How do you work when making music for a band like this, I suppose you have to be in a certain mood to hit it of the right atmosphere?
"Well when we started to compose those songs on the "Cthulu Wgah’nagl Fntagn" MCD, it came very natural and fast. Right now we have started to write music for the CASTLEUMBRA album, so let’s see how that comes along. Though speaking of myself, I’m kind of busy with some releases with my other bands, that are taking the most part of my attention and time right now. What we certainly need, is time to get some good moments of songwriting and composing going!"

I reckon the lyrics are based around Lovecraftian tales, do they follow the stories or do you do your own tales with base in Lovecraft’s universe, and how do you summon the words onto the paper?
"The lyrics are more based on the Necronomicon myths, between personal nightmares and fantasies towards the Sumerian, Mesopotamian and Lovecraftian Aura…"

How important are the lyrics for the concept of the band?
"Vital I would say, when mixed with the music we have a special bond within music and the authorship…"

What would you like to hit in people, when they are listening to your music?
"Hit the lights! Deep down in darkness!"

CASTLEUMBRA is a two man band, a phenomenom that has quite bloomed the last years, is it too hard to find a full band of like minded people nowadays, or what is your explanation on it?
"At this time I’m alone with this band – or well, project. The original drummer Alejandro Franco left, because he is busy with his own band, he plays in a Metalcore band, so he is very busy playing there, and with his personal life, job and etc… It’s very hard to find people not involved in a band already, that’s why. Because we just play with the same group of people we know, our friends that have been playing in the same bands the last 10 years or more. I will use the help of Cesar Sanchez (HACAVITZ, PROFANATOR, DROWNED IN BLOOD drummer) to record the next album which we have already a deal for!" 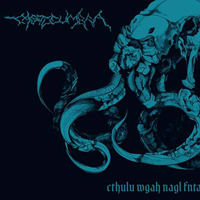 If you had the chance would you add more members to the band? And what about playing live, is that something you are doing, and is that with session members?
"As I said in a prior question, by now I’m only focused on composing new songs. Maybe in a near future we could play live with some friends helping me to make this happen!"

Your first release "Cthulu Wgah’nagl Fntagn" has been quite well received, did you expect it to be received that well, and how satisfied are you in the band with the music and the recording?
"I’m amazed how the results of the feedback have been on this MCD. I didn’t think that it could turn out like this. I’m so grateful with Mr. Narutoshi (Obliteration Records) and Anastasis (Nuclear Winter Records) for the incredible work they had put in this release, I hope I can still work with them in the future!"

The EP has been released both by Obliteration Records and Nuclear Winter Records, how did it end up like that, and will you continue to work with one or both of the labels in the future?
"I was contacted by Naru from Obliteration Records, and he helped to get in contact with Anastasis from Nuclear Winter Records to make it happen in Europe. I really hope to continue to work with them. I admire them and respect them so much, with all help they provided me!" 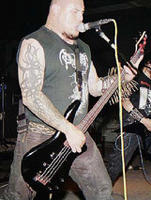 Are you working on new songs as we speak, or how does the future for the band look?
"At this time there are 2 new songs ready, and I’m working with new drummer Cesar Sanchez."

The Metal scene seems to have been blooming quite a lot in Mexico the last few years, with a few more bands than usual getting a good grip outside Mexico, how do you look upon your scene and what’s your guess on why Mexican bands all of a sudden are getting a grip internationally?
"I think globalization and the internet had made their work and there are more opportunities internationally speaking with bands from Latin America. I think CASTLEUMBRA is a very sober but darkified entity that just want to emerge and erupt dark Death Metal!"

What bands do we have to take a look at?
"Here in Mexico there are some that I could recommend for sure! Shit from Tijuana, BLACK TORMENT, RAPED GOD666, SEMEN, ASKKE, INFINITUM OBSCURE, TOMBSTONERS, BLACK HATE among others, the list will go on and on!"

What records have been spinning a lot at your home lately?
"KLAST "Tropean Winds", MORTUUS "Grape Of The Vine" and KHOLD "Til Endes"."

Thanks a ton for answering our questions, and for spreading dark and eerie mysterious Death Metal unto the world, if you have anything to add, feel free to fire!
"Thanks for everything Anders and for your immense patience, I will send you some stuff in reward thank you my friend! Thanks to everyone who read this!"