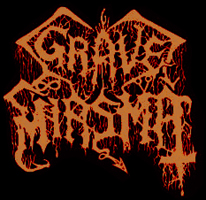 Like an atomic bomb GRAVE MIASMA hit the scene, late last year, with their EP "Exalted Emanation". Formerly known as GOAT MOLESTÖR, they executed a style of Death Metal that was immense dark and occult and coninued to explore the realms where "Slumber Of Sullen Eyes" and "Onward To Golgotha" stopped. An instant classic that received great reviews everywhere and ended up high in our own best of 2009 charts. Time to interview the band behind this masterpiece! Vocalist / guitarist Yoni shares us his words of evil


As far as I know, GRAVE MIASMA is a continuation of GOAT MOLESTÖR. Can you tell us about the forming of GOAT MOLESTÖR and why you started the band?
"Call it youth or something more, we felt the fire and ecstasy of Occultism through our veins. Manifested in matter were the revelations of Death Metal." 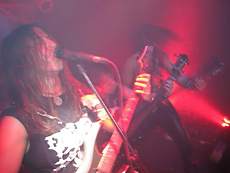 GOAT MOLESTÖR already was an obscure underground act and under the new name gained great response with its first release "Exalted Emanation" already. Kind of like the NIHILIST / ENTOMBED cult. Can you tell us the reason for the name change? And what were the reactions from GOAT MOLESTÖR fans?
"When the band began, to have the ‘G’ word in our name was almost a tribute to two big influences – Goatlord and Archgoat. Those bands had a filthy mystique in their aura and sound, in addition to a feeling pervading through their recordings we wanted to emulate. The reasons for the name change are quite simple. Around the time of our decision, there was a large influx of ‘Goat’ bands that, in our opinion, started to create a sub-division in Black Metal based on parodies and lack of creativity. Whilst not particularly caring about the opinions of others, we preferred not to be pigeon-holed with a certain faction or ‘sound’. Additionally, we had just completed ‘Gnosis Of The Summon’ which I still believe to be on a higher, more substantial plane than the material recorded prior to that track. A new name was thought to have reflected our metamorphosis to this next level. As it is obvious, we chose a name continuing the GRAVE MIASMA acronym, so not to abandon the past completely."

In what way did the switch from the label Bestial Onslaught to Sepulchral Voice played a part in this?
"The change in name came about some time before we had the honour of being asked by Sepulchral Voice to join their coven. Moreover, the "Realm Of Evoked Doom" EP was released by Bestial Onslaught as a one off EP, even despite the label vanishing from Earth’s surface completely." 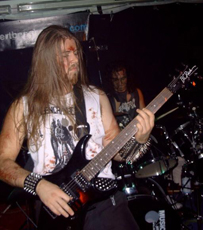 Maybe some readers are familiar with GRAVE MIASMA or GOAT MOLESTÖR only. Is there any difference between GRAVE MIASMA / GOAT MOLESTÖR in your opinion?
"All bands evolve, and we are no exception. From a completely musical perspective, the skeletal foundations of both material is the same, however there is greater emphasis now on layering and embellishments than there was in our rawer past. I would say that both eras have the same genuine feeling, although we have enhanced compositional and structural ideas as time has progressed."

My first contact with GRAVE MIASMA was by checking a playlist on which you were featured and then visited your website. The track ‘Pillars’ blew me away and I ordered the EP immediately. What surprised me was that GRAVE MIASMA doesn’t have a myspace page which a lot of bands use as a common way to promote themselves these days. Why is that?
"We think a website is sufficient in the meantime for people to encounter GRAVE MIASMA on the internet, whereas Myspace only serves to attract advertising and inane comments from others. However, we have recently ‘taken over’ a fan-page created on Myspace." 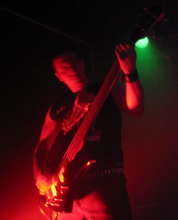 The last GOAT MOLESTÖR release "Realm Of Evoked Doom" will be re-released on Gate To She’ol Productions. Can you tell us more about this re-release and this quite new and unknown label?
"The status of the re-issue is actually on hold for the near future, as is the decision concerning which label will put it out."

"Exalted Emanation" is getting great reviews everywhere and it’s considered as one of the (for me THE) best EPs of 2009. Does this give any pressure for the next release to top this one or does it only encourage you to follow the chosen path? Have you written any new material since the EP recording? Why is "Exalted Emanation" promoted as an MCD despite its playing time of 37 minutes?
"Thank you for the compliment. Unlike many bands, the period whereby inspiration dries up completely, when there are no more vacant depths to bury festering beings, will mark the end of GRAVE MIASMA. We absolutely abhor the idea of play Black / Death Metal for the sake of releasing something, like many others have done before us, devoid of the devouring spirit of Death Metal. No new tracks have been written yet, although collectively we share many ideas for the future. "Exalted Emanation" has served only to strengthen our firm passage through the Abyss. Our initial intention was to record a 10" featuring four songs, as at the time we did not think we were ‘ready’ for a full length recording. More material was eventually written without abandoning those first thoughts. However, it is irrelevant in my opinion whichever way the release is categorised, as time should hold no barrier over Occult music." 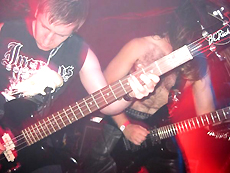 In some reviews your sound is described as sounding South American. Do you agree or how would you describe GRAVE MIASMA yourself? Are you in contact with South American bands?
"Sometimes music can not be confined to descriptions based on rational influences. Consciously, we are not influenced by what is known as the ‘South American sound’, other than by a select few of the rather more depraved bands like Hadez, Mystifier and Mortem. We are all huge fans of numerous other bands from the continent, although this does not always seep through the veins of a GRAVE MIASMA track. I must also stress that the largest inspirations for our sound are not based on other Metal bands or indeed from music in general."

The album art of "Exalted Emanation" fits the musical atmosphere quite well. It’s dark, grim, occult, cold and absent of live, light and hope. What are the four symbols on the cover and where do they stand for?
"The four symbols stand for Da’ath, Eternity, the Beyond, and the Material Plane. With "Exalted Emanation" being a collective exploration deeper in the Occult topics, we believed these four perceptions to be representative of the recording." 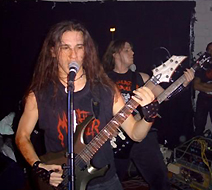 Another one about the release and actually personal curiosity. In the middle of the song ‘Arisen Through The Grave Miasma’ I hear a snapping sound. What’s that?
"The sounds were recorded by us, hitting bones against animal skulls."

Not many bands delve this deep in the pool of Death Metal. How do you get the inspiration to write such dark music and which bands do you see as an influence?
"Actually, I disagree. Almost every day I read about a new Death Metal band based on the ‘oldschool’ sound and aesthetic. Referring to a previous answer somewhat, our influences are not confined purely to past bands. But since you ask, some of the most important bands that shaped our sound are Goatlord, Asphyx, the early recordings of Incantation, Beherit, Demigod, Varathron, Mortuary Drape, Abhorrence, Demoncy, Shub Niggurath, early Rotting Christ, Transgressor and so on. However, these are just the ‘external’ influences, with more lying behind simple descriptions of sound." 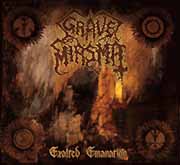 GRAVE MIASMA members were / are affiliated in other bands like THE ONE and CRUCIAMENTUM. Well, THE ONE ruled the stage when they played in de Baroeg (Rotterdam) last April and CRUCIAMENTUM just released a crusher of a demo called "Convocation Of Crawling Chaos". Can we see these as your side projects or your band as well? And how come you all share interest in playing this total dark oldschool Death / Black Metal?
"Only for two gigs in the past were myself and our drummer involved in THE ONE (indeed, they are a spectacle to watch on stage now, and the recent album is a masterpiece). In that time we did not have any creative input, and were involved on a session basis. Aside from Cruciamentum, our drummer Dani also plays in Adorior and Indesinence. These bands are not side projects at all, since none of the related bands hinders the creative output of another."

Talking about dark and oldschool Death Metal, this style seems to have found new fans and bands like FUNEBRARUM, HATESPAWN, DENIAL, NECROS CHRISTOS a.o. are raising the banner. Do you see this revival also in your own country (beside the bands you’re involved in)? Can you also tell me something about today’s UK scene in general?
"There are not many newer Death Metal bands – at least of this ilk – that have been incepted in the UK. However, since the 90s Britain has always been lagging behind the currents of Metal. There are more and more bands coming from the UK who are releasing relevant material, such as Scythian, although following scenes is not a pastime I have the time for in general."

Any plans to tour this continetal side of Europe again? And on top of that, touring outside of Europe? With which bands have you played already and can you tell me about the contact with these bands? I was told first hand that you won’t like to play in Holland because of the louzy show up in february 2008 in Arnhem. Well you SHOULD play here and I’m pretty positive you’ll face a more wild crowd when you play in a bigger place like Amsterdam (Melkweg). Did you change you mind about the Netherlands already? What were the coolest / best gigs you did so far?
"Hah, well we have no problem to visit the Netherlands again, even if from my experience of watching and playing gigs in Holland crowds are relatively sedate with not many willing to travel to another, nearby city to witness an event. We have had the honour of sharing the stage in the past with Kaamos, Necros Christos, Archgoat, Drowned, Dead Congregation, Kill amongst others. The experiences that stand out the most are those that have taken place in Germany, where there is a tangible reciprocal energy wherever we play."

Is GRAVE MIASMA the only way for you (guys) to express interest in the occult or do you have other ways or forms of art?
"I would say that GRAVE MIASMA is perhaps the key overt creative output for Occultism. I am not artistic enough to sufficiently put on paper images of mystic visions, however our guitar player Bestial Aggressor has embarked on experimenting with abstract cinema."

Please, finish this interview with everything you would like to share about the gig in Helvete / Oberhausen and what we can expect from GRAVE MIASMA in near future.
"We have played two concerts in this legendary venue, which were perfect. The industrial heartland of Germany (and Köstrizer beer) brings the foulest best from our pores. Following some planned live apparitions in 2010, we will revert to semi-dormancy and compose the next release."

Closing with anything you like to add!
"Thanks for the support. Our main portal of contact remains our website, www.gravemiasma.co.uk and almost all mails are answered. Arise!"