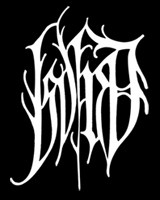 Norway’s ISVIND has made an epic return to form in the past few years. Their nostalgic 90s era Black Metal sound has provided new generations with a taste of the past. Releasing their latest offering "Daumyra" was recently reviewed in these pages (feel free to take a gander). Let’s dig into the world of ISVIND with Arak Draconiiz…


Greetings and thanks for taking the time for the interview. First of all great job on the new release, it was a nice return to form with a nostalgic feel. Let’s discuss the new album, what was the songwriting process like and how did it differ from your last album "Intet Lever"?
"Greetings to yourself! Thanks for offering time to listen to our Nautical Nihilism and setting up this interview. The songwriting was more or less the same as for the other albums and demos we have done. We both make music and mostly finished songs that we play for each other, and make adjustments where needed. One thing, which I’m sure you can hear, is that on “Intet Lever”, we had more time rehearsing before we recorded it, making for more interesting song structures and drumming in my opinion. We have a much better sound on “Daumyra”, and that is because we did some retro-studio magic when recording it. If we combine the two for our next release, it will be closer to quality than we have ever been." 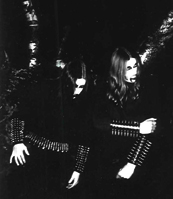 "Daumyra" is your first release with Folter Records, how did you come about working with Folter? How have they been to work with? Did Kyrck Productions & Armour not have interest in releasing another album?
"We have been working with the Folter Conglomerate in the past when doing gigs. That has proven to be a good collaboration, so when the Curly German asked us last tour, it was easy to say yes. Especially since I was drunk… Kyrck will still do the vinyl edition of “Daumyra”, and maybe some more of "Intet Lever", and of course the demos. He does great things when he does what he does. Not that I have asked Kyrck, but I think we can get more out of the package with Folter as a label, as they do promotion, shows and all the other peripherals. “Intet Lever” was self-released, something I think we will not do again."

ISVIND has kept that 90s era sound in a time where Black Metal bands are incorporating better production, keyboards, female vocals, etc. How is it you are able to keep the traditional sound and not move forward with experimenting with keyboards, female vocals, etc?
"We have a hard enough time trying to make drums and guitars work! Us bringing keyboards and heavy vocal arrangements to the table would mean total disaster, plus it does not sound very well in my ears. We are both stuck in the 90s when it comes to Black Metal, and that is where we made ISVIND, and that is where ISVIND is being made still." 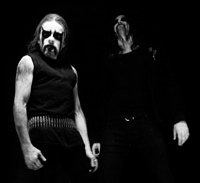 What bands are currently serving as your inspirations? What new Black Metal bands are you currently seeing as carrying the torch for the next generation?
"No bands serve as inspiration to us. Not to me at least. Of course, sometimes when hearing a really good Black Metal song, it drives me to think music and I feel inspired to do music. There are a few bands out there that do Black Metal in the old style, and that does not seem to want to try and do it any other way. When you are a listener to the Black Metal, you feel it in your spine when something is good, and there are a couple of young bands that do that for me now. I will not namedrop; Go explore."

There was a huge time gap between "Dark Waters Stir" and "Intet Lever", what was happening with ISVIND during this lengthy hiatus? What difficulties did you run into when you decided to resurrect the band?
"The long break was us growing up: finishing school, getting jobs, having a kid, divorcing. When we met again and saw that we actually could make another album, things just started rolling and happened by itself. There was a lot of work, but looking back 3 years, I see it as a place where we picked up where we left, and things just move forward all the time."

Let’s talk about touring, what are the current plans for ISVIND playing live?
"Yes, we are trying to put together a tour. We are trying to make it as big as possible, so we can cover as much of the surface of Earth as possible in one go, so we can get back home, take a little breather and get to the studio to start and work for our next album. We are thinking of Europe and South America." 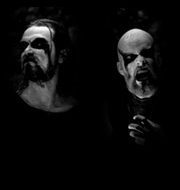 What side projects are you and Goblin currently in?
"I don’t think Arak is in any project these days. I am still a part of ORCRIST, even though I haven’t made a note for that in years. We should try to make another album somewhere along the way, but I don’t know when I will ever see the time to do that. Our live bass player and me are trying to get another band going. That will not be Black Metal though."

ISVIND has been a 2 piece band since the start, has there ever been a discussion about adding more members?
"Never! ISVIND works best when there are just the two of us. I have played in bands with up to 6 opinions, and that is a major hassle, at least for me it is. We just know what to demand of each other, and the process is very streamlined, maybe just a little too much streamlined for “Daumyra”, but we’ll come back stronger."

Thanks for your time, do you have any last comments for our readers?
"To the public in general: get of the internet, read some books. And don’t be that asshole that does not use turn signals."