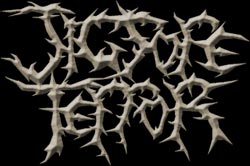 One of the most refreshing Death / Grind albums of 2004 surely was "World End Carnage" by Sweden’s JIGSORE TERROR! Pretty much unknown before, these guys immediately became one of my personal new favorites in this genre, right next to established names like NAPALM DEATH, TERRORIZER, REPULSION and (to a certain extent) MISERY INDEX. JIGSORE TERROR was founded back in 2001 by guitarist Tobbe "Six Feet" Ander (probably best known from the band Leukemia) and drummer Adde Mitroulis (who a.o. also plays in another favorite of mine, General Surgery). Shortly after bass player Hampus Klang (of Bullet and Hypnosia) and vocalist Tobbe Eng (Thunderdog) completed the picture. In October 2002 the band recorded six songs at Sweden’s Soundlab Studios with producer Mieszko Talarczyk (R.I.P.) and in 2004 they got offered a deal by French Listenable Records… which they gladly accepted of course. Before the recordings of "World End Carnage" vocalist Tobbe left the band due to lack of time, so Adde also recorded the vocals on the album… He was also the one to answer our interview questions… Enjoy!


You guys have all been playing in several underground bands before you finally founded JIGSORE TERROR in 2001 and LEUKEMIA, GENERAL SURGERY, BULLET and HYPNOSIA are probably the most known names in that respect… As far as I know at least BULLET and GENERAL SURGERY are still alive, so is JIGSORE TERROR basically just a side-project for the three of you?
"Yeah, you could say that. We all have our main bands, but we are absolutely serious about Jigsore Terror. Our other bands will come first though."

Before "World End Carnage" came out I never heard of you in any way, so did you never do any self promotion in zines or anything?
"Actually it was never meant to be so serious. We started this band just for fun. Play oldschool Death and drink some beers. So of course no one had heard about us before." 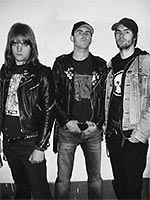 What about JIGSORE TERROR’s demo days? There’s supposed to be a tape that obviously made Listenable sign the band, so tell us a bit more about that… Which songs appeared on it, where did you record it, did you sell / spread that to fans and zines or was it exclusively meant for labels?
"We recorded 6 songs in Soundlab that we sent to some labels. No cassette though. Just a CD-R. We didn’t release any demo. We gave some copies to our friends but that’s it. The songs on the demo recording were ‘Gorging On Exposed Arteries’, ‘Slaughtered Existance’, ‘Death Rattle Cacaphony’, ‘Rotten Heads’, ‘Scattered Cranial Remains’ and ‘World End Carnage’. But with other song titles and other lyrics / vocals."

Did you already play any live shows with JIGSORE TERROR at the time? If so, tell us a bit more about them, like with whom you played, where the gigs took place, how the crowds reacted on your material and so on…
"Yeah, we did some shows. But only local shows and at parties. It was pretty cool. People seemed to enjoy it. We have only done one show since the album came out. It was here in Sweden in a city called Linköping, together with Vicious Art. It was a lot of fun but very few people came."

When and how did Listenable Records get into the picture then? Did you gain any other label interest or where they the only / most serious ones? How did things develop from there?
"I think only two labels got back to us after receiving our demo. Listenable was one of them and they offered us a good deal right away so we signed with them. They are promoting the album pretty good. Things happened pretty fast when we got in contact with Listenable. We just had to write some songs and record the shit. We are happy with their work so far." 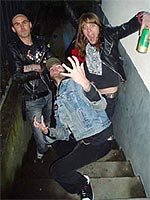 The album was then recorded in Soundlab by Mieszko Talarczyk (R.I.P.)… Was that your own wish or did Listenable suggest you to record there?
"Both parts wanted the album to be recorded with Mieszko. We were satisfied with the sound on the demo, and so was Listenable. So of course we recorded the album there as well."

Tell us a bit about the time in the studio… How long have you been there, did you have to face any difficulties during the recordings and has Mieszko’s experience helped you to get a better result maybe?
"We were in Soundlab for two weeks. When the bass was recorded and we were recording the guitar, we noticed that the bass was out of tune. So we had to rent a bass and re-record it. That sucked. But it took only three hours to record it again. Everything else went really smooth. Mieszko was very easy to work with. He came up with a lot of ideas. So his experience helped us pretty much."

Mieszko unfortunately died in the tsunami not too long ago… when and how did you find out about that? I suppose you were pretty close to him, so I guess you must’ve been pretty shocked to hear that, right?
"It was my friend Jocke (General Surgery) who sent me a link where Mieszko’s sister had put out a missing report of Mieszko. I was really shocked and I couldn’t believe it. Then I saw the news on the internet that he was missing. I think the hardest thing for Mieszko’s family and friends were that they didn’t know what happened to him, until three months later, when his body was found. It’s still hard to believe that he’s gone." 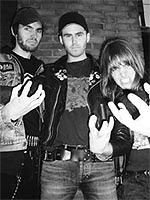 On the album- and website’s pictures there’s only three members featured, but there used to be a fourth guy if I’m not totally mistaken… So, who was he and what is the reason that he’s not part of the band anymore?
"Yeah, we used to be four in the band. But our vocalist left the band just before we entered the studio to record the album. He wasn’t the right guy for this kind of music. He plays in a Punkrock band called Thunderdog. Nothing more to say really. He’s a nice guy but his voice didn’t fit in this band."

After September 11, the word "terror" became quite a touchy subject around the world, so I was wondering if you already had to face any problems because of that maybe?
"No, we haven’t had any problems with our band name. Yet!!!"

Did you actually have anything particular in mind when you decided to name the band JIGSORE TERROR or was it mostly because it sounds cool?
"Ha ha ha!!! I don’t know what Jigsore means actually (as far as I know it is a kind of saw, isn’t it? – Frank). We took the name, just like you said, because it sounds cool. Ha ha ha… fucking losers!" 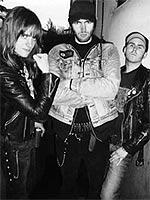 I was heavily impressed by the freshness of the material on the album, which seems to combine the best elements of classic CARNAGE, TERRORIZER and NAPALM DEATH… Did those bands have an influence on JIGSORE TERROR in any way? Which (other) albums / demos really shaped JIGSORE TERROR’s musical style?
"Of course we are influenced by Terrorizer and Napalm Death. The main reasons why Jigsore started are Terrorizer and Repulsion. We are like a tribute to the old Death Metal bands. Death, Morbid Angel, Carcass etc…"

Just like in any other Metal genre I would say that also in Grindcore there’s various different subgenres of this particular style… On one hand there’s bands that play a rather noisy form of music, with tracks that only have a pretty short playing time (to me that’s the type of bands that often simply lack any musical talent) and then there’s bands (that I would also associate JIGSORE TERROR with), that manage to impress with good production and playing skills, yet maintaining the extremity and rawness of Grindcore… So, what does Grindcore mean to you guys? Would you categorize JIGSORE TERROR as a "typical" Grindcore act for one reason or another?
"I prefer my Grindcore like the way Jigsore plays it. I don’t like noise at all. I wouldn’t say that we play typical Grindcore. I’d say we play Grinding Death. Or something… There are too many genres nowadays. 10-15 years ago you could say that we play Grindcore. Today it’s Death Metal. I don’t care. We play Terrorizerrepulsion Death, ha ha ha!" 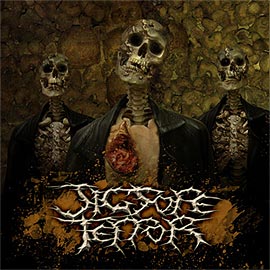 What about the lyrical side of the songs? Grindcore either seems to be connected with political / socially aware type topics or with the total gore type stuff… What kind of subjects do you guys write about? Do you actually care about genre "limitations" in that respect? Feel free to comment on a couple of the most important lyrics on the album…
"I hate political lyrics. I don’t want to and I don’t know how to write that kind of lyrics. So I have to say that Repulsion is the influence to our lyrics. Our lyrics are pretty crappy. It’s just about gore, death, murder, piss and kill. Just the way I love it."

What have you been up to ever since the album came out? Collecting great reviews exclusively or have you also played any shows or written any new material already?
"We have been looking for a new vocalist. We have found a guy but nothing’s for sure yet. We did a show a month ago with Vicious Art. We have all been busy with our other bands so there hasn’t been so much time for Jigsore. But we’ll see what happens in the future. We gonna rehearse some with our vocalist. That’s all I know at the moment."

Well, it seems I’m running out of questions for now, so if there’s anything else we might have forgotten, feel free to mention that here… Thanx a lot for taking the time and all the best!
"Thanks for your support and for the nice questions. Take care everyone and keep grinding!!!"