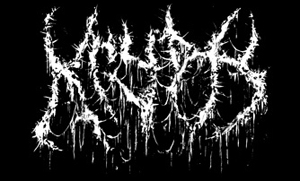 Finland’s KRYPTS was formed in 2008. Newcomers from a country that has given the global scene some of its finest exponents of Death, Black and Doom Metal among other genres. Their surprisingly good debut demo "Open The Crypt" marked their first step into the underground, followed closely by a 7" EP, "Krypts". Fast forward two years (2013), the debut album "Unending Degradation" took the world by storm with a well developed sound from these young Deathsters. Their undeniable influences from other Finnish bands is there, but KRYPTS has managed to create a heavy, almost Doom-ish style of Death Metal, surrounded by an evil and mesmerizing atmosphere. We were lucky enough to talk to bass player / vocalist Antti Kotiranta about the past, present and future of Finland’s new powerhouse, KRYPTS…


Three of the current members of the band were also part of SELF HATE, formed in 2003 (which changed name to THE BEHEADING in 2006). So you had known your band mates for 5 years when KRYPTS was formed in 2008. How did this help creating the sound and style of KRYPTS? 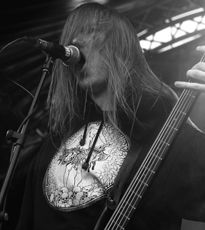 "Mainly by knowing what we don’t want to do. Vile, O. and others created the band in 2003, I came along in 2006 and not soon after the name was changed. We released one demo under that name and things died while recording the second one. The main reason for this was that we were fed up with the band, the music that we were playing and O. and I started to got more interested in Death Metal. That way we got to know each other and from those ruins moved into new direction."

"Open the Crypt" was your first demo tape, released in 2009, almost a year after the band was formed. Looking back, what do you think about it? Was it a solid first step onto developing how the band sounds nowadays? How was the demo received in the underground? Do you have any memories of the recording process?
"Even if our sound has evolved, the main elements are strongly presented in "Open The Crypt". The core is still more or less the same, even if for now it seems like we will never release something similar. We were satisfied with it back then and still are. It’s our first and in some way the most honest release as we didn’t exactly know what we were doing back then, just followed the urge. The demo was received extremely well, way beyond our expectation, and spread mainly by the word of mouth. It was recorded in our practice place and in O.’s bedroom during Spring 2009, but can’t remember much of those sessions except "Open The Crypt" was missing some lyrics and we wrote them just before recording the vocals for it. Sadly it never was released as tape, only as CD-R and 12", but maybe we will finally re-release it and the 7” together as tape."

I got to know the band from the "Krypts" 7" from 2001. In my humble opinion, it showed a great improvement in sound and songwriting compared to your demo tape. Do you feel it was your breakthrough release? How did you get in contact with Jerry and were you satisfied with Detest Records work at the time?
"I guess "Open The Crypt" is how most people heard from us but the s/t 7" made us more recognizable. The two tracks are bit different from the rest of our stuff as they concentrate on different aspects than especially the demo tracks. Jerry contacted us some time after the demo, though no idea how he heard from us. He had released the SWALLOWED demo tape and the guys said he’s a trustworthy, so we agreed to the 7" deal he proposed. Even if there were some problems and I even wrote a too harsh mail to Jerry regarding the label’s activity, now retrospectively speaking I’m really glad we decided work with Detest and Me Saco Un Ojo as it was the right choice."

"Unending Degradation", your 2013 debut album, was released by Dark Descent Records. Did Matt contact you guys with an offer or were you looking for labels? Are you happy with Matt’s work so far? Were you aiming for a certain atmosphere or sound at the time of the recording sessions? Also, two of the songs from the demo tape made it on the album but the EP songs were left out. What was the reason for this? 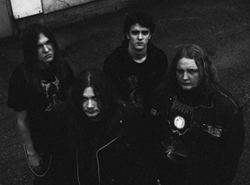 "Sometime after the 7", before we started to work with the full-length, Matt sent us a mail and asked what we thought of him releasing the CD version of the album. He lets us do our own thing, has given a lot of support when needed and knows what he’s doing. Also he is a nice guy so there’s nothing to complain about. We definitely were after a oppressive, reverb filled catacombish atmosphere with "Unending Degradation"! It was clear from the beginning that the three tracks from the demo will be re-recorded, but the EP songs were left out as we didn’t think they fitted into the album’s context. We started to work immediately on the debut after the 7” and were more or less fed up with it. Also each of our releases has been a counter attack to the previous one."

The region of Helsinki-Assuming, your hometown, is one of the fastest growing areas in Europe. Is the local Metal scene growing fast as well? How has the band been doing in your own town? Do you have enough venues to play gigs and hang out?
"There are interesting gigs every now and then, but no idea of the scene’s growth. We’ve played a bunch of gigs here last year and have no interest in doing so for now. There are a few good venues but most of the interesting gigs are in different places." 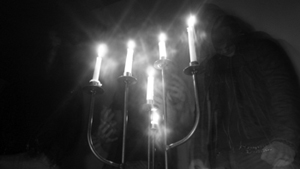 The Finnish scene has had a lot of great names in the Metal underground like DEMILICH, ABHORRENCE, DEMIGOD, RIPPIKOULU and so on. Most of the bands have similar aspects, such as a massive sound and almost a Doom Metal approach to Death Metal. Do you see this style reflected on your band? And how have you managed to sound fresh and updated? Do all members share the same musical taste and influences?
"It’s rather obvious that the old Finnish bands are the biggest inspiration source of our sound, but definitely not only. We have never tried to sound anything specific, followed our vision and kept doing our own thing. The early Finnish bands and many other Death and Doom Metal bands are what each of us listens to. Otherwise each listens to different stuff from traditional ethnic music to electronic etc."

How about your touring schedule? Are there any big plans for 2015? Any good memories, mishappenings and / or anecdotes from past gigs?
"No touring plans for now. A month ago we played in Szcechin and Berlin and the next performances will be in Finland: Rooster Death Fest in August and Finnish Death Metal Maniacs in September. Otherwise we try to start the recording process in Fall. With our ex – guitarist many shitty / good memories, like how he passed out just before heading to the stage in Holland. There was this guy from Century Media who came to see the show, whom our guitarist met after the show in the toilet and started to talk in Finnish about the Finlands’ victory of Hockey World Championship in 1995."

How do you see the state of underground as of today? Do you miss anything from the past or would you go back to rescue certain things from the early 2000’s?
"Ok. We were 10 in the early 2000’s so no comment."

How did you guys start into the Metal world? What was the first Metal album you bought and do you still have it?
"Doom games, horror literature and movies. The aesthetics and obscure atmosphere was what interested first and later came the music. Think O. and V. started with bands like METALLICA and SLAYER, but the first album that I actually bought myself was SENTENCED’s "Greatest Kills" compilation after borrowing and burning DOWN from local library. Few years later found the album again and fell on my knees due to the intensity of tracks ‘In Memoriam’ and ‘Truth’, hah."

Who or what make you pick up an instrument? In your case, the bass guitar. And what was the reason for you to start singing? Were you confident about doing both things in KRYPTS?
"Don’t remember, but started with double bass and changed to electric soon after. In the beginning we didn’t have a singer, so decided that I will take care of the vocal duties for the demo. I had only done some backing vocals previously, so it was a challenge at first and was meant to be a temporary thing."

This is one question I always ask: the internet, a blessing to some, a curse to others. Where do you stand on this subject? Do you think bands should be bound to the classic ways of promotion or should they embrace the use of technology? How about file sharing and piracy? 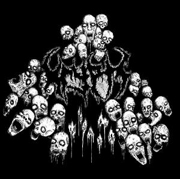 "It’s just a tool. It makes spreading new stuff easier, so more audio cancer is released but the good old word of mouth usually takes care of that. The social media is a bigger problem than the internet, mainly because the way it’s used, and I wonder why some bands think it’s interesting to spread some irrelevant information. We don’t care how our audio degradation is spread if there is no profit involved, but think it important to have a physical copy of an album and don’t get people who buy mp3s. Honestly I’m glad to see what the piracy has done to the commercial music business, but it would be foolish to think that it doesen’t have side effects to small labels as well."

Well, Antti, that is it. Thank you for your time and your answers. Are there any news you would like to share? Any new stuff coming up? Again, thank you and take care!
"Appreciate the patience and thank you for the interview! We are currently working on our second album. Most of the tracks have been composed and the vision for the rest and arts is there. Like I said earlier we are aiming to start the recording around autumnal equinox, but there are still few pieces missing. Those who are expecting a second "Unending Degradation" will be dissapointed for it will be slightly different than any of our previous stuff. Expect to be devoured by a supermassive black hole – entropy prevails."