From time to time it happens – one is listening to an album and is simply astonished by the music blasting through the speakers. Immediately the head starts banging and volume is turned up, one is fascinated by the undiluted energy the music is able to transport. Suchlike was my experiences with the debut of R:I:P. Close-minded people may whine because of "modern Metalcore", but such discussions and speculations are futile. It is Metal, it is great, so here is a short interview with R:I:P in order to have a closer look on the band.


Well, as a start, could you give us a short survey of the band history so far?
"Hi, I’m Fabz, singer of the German Metal band R:I:P. We’re 4 crazy dudes and a dudette playing Metal! We came together in 2005 recorded a demo and a full length album, landed a label deal and here we are! …OUT TO R:I:P ALL NATIONS!!!"

Tell us something about the reactions for "…Out To Rip All Nations!!!"
"Well, so far the reactions have been pretty fuckin’ good! The people seem to like the shit really. That or they are all fuckin’ good liars! ; -) Reviews are goin’ great and we are very happy so far."

The name R:I:P is a short-cut, so what is the meaning behind this?
"Haha, we needed a name, and I think I came up with the idea. I wanted a short name which everyone can spell. It means Raw:Intense:Power."

You label your music as "German Premium Metal" – why do you use such a categorization?
"It all begun with a joke between Bjšrn and me, but soon we realized that we are not pure Thrash, pure Death or pure whatever Metal, so we needed a label. We thought "German Premium Metal" was the right choice and people really like it. At least they talk about it!"

All members are active in other bands, so do you see R:I:P more as some kind of project or as a real band?
"No, R:I:P is a real band, although we don’t play many live dates, we see ourselves as a real band. I mean, yeah we all have a full calendar with our other bands but we always knew that this is more than just a project. We all stand 100% behind R:I:P."

Since you regard R:I:P not just as a project, isn’t it difficult to coordinate rehearsals and live-gigs, especially when all of you are active in other bands?
"As I said before, we don’t play that much gigs with R:I:P, but we plan to do more live stuff next year. It’s a matter of coordination I guess but it will work, I’m sure."

Tell us something about the songwriting process. According to the booklet all songs are written by R:I:P, so how do you work on writing songs?
"Björn and I are bringing in the basic ideas, we demo everything at home in our small pro tools demo studios. Then we send the stuff around to Chris, Biggi and Sven. They put their stuff in. Then we meet in the rehearsel rooms try things, rearrange stuff and simply put our ideas together. Sometimes someone comes with a finished song but rarely. We try to get as much input as possible."

Your first album, but you sound like you used to play togehter for years… how did you manage it?
"How should I answere this without sounding like a dick… mhhh… We are Metal-gods you know??!!??! Haha, no serious, We are all active musicians for 10+ years now, we all practised very hard, There’s no too big egos in the band, we all get along fine, we worked very hard on this CD and we knew what we wanted from the start. It all comes totally natural."

Do the members of R:I:P have full-time jobs or is anyone in the lucky situation to make a living (regarding the money aspect) from playing / releasing music?
"Björn is a guitar teacher, I run a music-studio, Chris is a teacher, Biggi is working in a geographic-whatever-thing and Sven studies music on university."

I read you like playing live-gigs, so how often have you played live and how do you rank playing live?
"I love playing live, we played 2 1/2 gigs so far. The 1/2 gig was because I jumped into the crowed 3 songs into the set and destroyed my ankle. I was rushed to the hospital and I took more than 6 weeks to heal. Not that much gigs, but all gig were pretty intense!!! But people: We’re coming!!!!!! Stay tuned!!!!!!"

Generally, what is the situation in your local area concerning gigs? Quite easy or is it difficult to find any venues for gigs?
"It was better, years before, but it’s ok. There are some cool venues to play here."

Like it or not, but on your debut the Metal-core influence is very present. Do you have any connection to the Metal-core scene? Do you see any differences between this and the more tradtional Metal scene?
"Hmmm, yeah, Metalcore, I like Killswitch, Shadowsfall and even newer Bands like In This Moment, maybe we really have some MC-influences on our record. I don’t care much about it. If I like the song I don’t give a flying fuck if it sounds like Metalcore or Hardcore or whatevercore. If it rocks it rocks. Period."

How do you judge "myspace"? Nearly every band is present on this network. For me as a fan the only advantage is that I can listen to new tracks, but that could also probably being done on a "normal" homepage. How do you, as musician / band-member, see the myspace-networking topic? A neccessary evil, because everyone is doing it or is it really helpful?
"Oh I’m really a Myspace fan! It got me into so many cool bands I never would have known about without myspace. The fact that it’s free is really cool but I wished they would not compress the songs like they do. And it would be great if they would let you upload more songs than the usual 4 or 5." 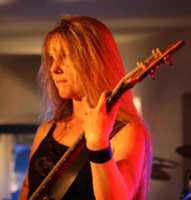 The mainstream Pop-band RADIOHEAD recently released their latest album completely for free, via download from their homepage. In time of internet, myspace etc. the need for record labels seems to be vanishing more and more. Do you think bands still are in need of labels? Especially having in mind that you recorded your album on your own, without label-support.
"I do a similar thing right now with my band Respawn Inc.! We’re giving away our new album "Stone Cold World" for free at the moment! We are lucky enough that I own a studio so the production costs us nearly nothing! I’m happy we found a label with R:I:P but on the other hand only time will tell if it is better than self distribution. So far the guys at the label do an awesome job, we are in nearly every zine out there with ads and reviews. So far, so good."

In my review I assumed 95% of the VOICES readers are not interested in your music. So, with your last word for this interview, you have the chance to persuade those people to take at least a listen to your music.
"I think the Metal fans these days are much more open minded then back in the 80s. Our music speaks for itself love it or hate it but don’t just ignore it! Chances are good you like it!!!"