Mexico’s impressive two-piece, ZOMBIEFICATION, are about as genuine as they come; their recent release “At The Caves Of Eternal” is a genre-bending salute to heavy that will appease a wide array of tastes. Their aim is true and the riffs are nice and fuzzy, which perhaps could also describe its members, Mr. Hitch and Mr. Jacko, but don’t tell anyone. Either way, their unwavering philosophy of brutality has allowed them to create an exciting and refreshing album while laying waste to pretentions and preconceptions. Jacobo Cordova aka Mr. Jacko was nice enough to find some time amidst a busy summer of touring, promoting and overall slaying to correspond with me on their new release and any other topics I found in my skull.


Greetings, Mr. Jacko!
"Hey Angelica! First of all, thanks for taking the time and supporting the true underground, it is truly appreciated from this zombie side." 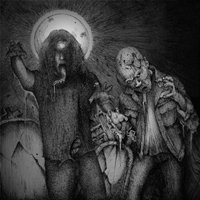 What are the origins of your line-up? I always find it interesting when bands have one or two members and have additional musicians just for shows. Why do you prefer to remain a two-piece?
"The origins of the ZOMBIEFICATION line-up are and will always be the same ones. It started as a 2 piece Metal Machine and if one of us 2, Mr. Hitch or me, Mr. Jacko, one day decide to break the oath, the band will be no more. This was the initial idea and it has worked greatly so we want to keep it that way. This also has to do with the fact that we work better as a 2 piece, each one has his role and since we are very disciplined when working, we focus on the tasks spiritually. On the other hand, and I don’t know about Mr. Hitch but I, never want to deal with a band again, I did that for so many years that I just don’t want to experience the “democracy” of it all! There is no fucking “democracy” in a band, some are just better at some things than others, but I guess that is just hard for many to understand. For the live performance, we have session musicians in the 2 guitars and drums. Mr. Brains and Mr. Kim are in charge of the axes while Mr. Hammer charges with hate the drums of hell. Mr. Hitch is in charge of the vokills and I pound the low end." 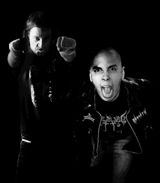 How would you describe the Metal scene in Mexico? Has is gotten more widespread in recent years? Do you find that you have more support locally or abroad?
"I would describe the Mexican Metal scene as one that “once was one of the most important ones in the world and today only looks to the past”. What I want to say is that in the 90s we had one of the greatest scenes in the world! SHUB NIGGURATH, CENOTAPH, BLOODSOAKED, THE CHASM, ARGENTUM, HARDWARE and many, many more bands. They had a huge following in the underground. Unfortunately today, there are great bands but the scene is so stuck with what “once was” that they are forgetting the important things about the present. There are really talented bands like GUTWRENCH, EVIL ENTOURAGE, RAPED GOD 666, HACAVITZ, DENIAL and more, but the support is minimal and that is why some of these bands, just like us, unfortunately look outside our countries to get the much deserved price for the hard work, yet at the same time we are proud of trying to make this scene grow again. Hopefully organizers, bands, fans, labels and all the lot, will realize sooner than later that instead of stepping on each other’s shoes, what we have to do is become one force to rise Mexican Metal Of Death to the level it deserves." 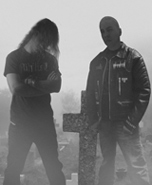 Your sound is described as Death Metal often, but on "At The Caves Of Eternal" there are many different styles going on. Who are your main influences, music or otherwise?
"You nailed it pretty much with that comment. If you see, in our previous records we would describe our music as Death Metal raised on Aztec Bloodshed! Today we took the Death part out, as it used to be a tribute to that genre only, but today we have decided to incorporate all kinds of influences of music as long as we like it and this has broadened our sound! Many people have said our new album is more Black than Death Metal, others say it’s Black Metal with a Death Metal production. This has been gratifying for the band, cause even if we are not looking to see what others think, it is always great to know that people are liking and paying attention to our music. We do it for ourselves, but the great kick from Metalheads is fully appreciated. This leads to the future where I think we will incorporate even different influences as long as they are filthy, raw, dark and epic!"

How did your sound evolve from the 90s Death Metal that’s largely popular in Mexico? For some reason I always think of Black Metal coming from colder climates, but I’m usually wrong about everything. Are folks into the Black Metal thing in Mexico or is it just a small niche thing? Does anyone wear corpse paint?
"Black Metal may be cold and atmospheric music, but at the same time it is grim, sad and raw, and that I think is where the influence comes from. Mexico is a grim and violent country with a lot of hate everywhere, so then I guess I show that influence turned into soundwaves. Black Metal is not as big as Death Metal here, but it has a rather good following. A funny thing is that sometimes you see a lot of assholes that have no real idea what Black Metal is supporting it. For instance, I remember seeing this really black skinned guy with a fucking swastika patch on his back, stooopid. Also you get to see a lot of people talking a lot about how great BURZUM and his philosophy is and they can’t get it together to know that in that philosophy they would be erased. It is a funny country and yes, sometimes they even wear corpsepaint, auggghhhhh."

What about horror movies? I feel like its obligatory to ask most Metal bands about their favorite horror movies…
"I sent this question to Mr. Hitch, since that is his department and this is what he had to say. He starts talking about it a little and then dives completely in the lyrics of the band ja." Mr. Hitch: "In "Midnight Stench" the inspiration comes from experimenting with stories coming from movies by Dario Argento, Romero, Fulci, Ossorio and Hitchcock, as well as theology and everything around death without falling into the mainstream idea. From Hitchcock we find the suspense that in a natural way is heard throughout the music. Contrary to popular inspiration in Death Metal, we didn’t pretend to pay tribute to gore, horror or suspense films. Instead we wanted to extract a way of telling real horror and zombiefication stories in our lyrics through real life. Say the zombiefication rituals in Haiti, the day of the dead in our country and many more. In "Reaper’s Consecration" this mystery evolves around the music where more thought voices from the gut and down the grave come to life. In our latest album, we dive deeper into the origins of zombies in witchcraft, types of zombies and the dual souls. And again, no, we are not talking about zombies as in popular culture, we are talking about real life ones. Our 3 albums are united by death, witchcraft and that eternal search of death when least expected."

What are your plans? Are you touring anytime soon? Where are you headed?
"We just returned from Europe and the tour went great. 15 concerts in 21 days with great support. Italy, Spain, Portugal and France felt our stench and hopefully we can return next year for a shorter track, say 10 days. We already have some shows booked here but nothing as big as a tour to say. Both of us have families, so our creativity sometimes is more important than our actions. We are headed towards leaving a mark in the underground by doing the most sincere music that comes from our gut. And if on this road people dig it and embrace it, killer, if not, killer too, as long as we have the urge to express ourselves through death rites, we will keep on doing it." 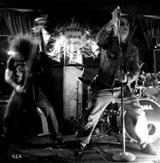 Pulverised seems to have a broad range of bands from around the world. How has your support / promotion been with them thus far? How did you get linked up with them?
"We are extremely delighted on being part of such a great rooster as Pulverised. INTERMENT, FLESH, DESULTORY, THE BLACK, AMON AMARTH and many more have formed part of that extreme Metal family. The support from Roy and Calvin at the label has been great and the band has surely grown and is starting to be more and more recognized within the underground thanks to joining forces. In the beginning we sent Pulverised our demo, handmade and personalised by the way haha, and we got no feedback. When our first EP came out after the debut, Pulverised bought from Chaos Records the worldwide license of the EP and after they offered us a direct deal with them. Hopefully in the future things only get better as they seem to be heading too."

I hope so too.