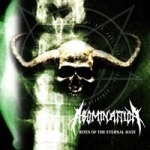 Destroyer Records is an underground label based in the South of Brazil, dedicated to brutal stuff. Their website is written in Portuguese for the moment, but they promised to build another one in English soon. Anyway, I saw the first effort from ABOMINATTION in some distros here in Europe, so I suppose it would be not so difficult to get it. This Brazilian four piece hail from the Sao Paulo area, for more infos about the line-up, check out our news section. Musically, the band follow the path paved by KRISIUN, REBAELLIUN and ABHORRENCE, but don’t expect a mere carbon-copy of those aforementioned bands. ABOMINATTION favour complex song structures and don’t abuse of the speed factor. All the tracks on offer here are based on a mix of fast and slow grinding parts, with very adventurous drumming. I don’t want to use the word technical loosely, because ABOMINATTION aren’t certainly not a Techno-Death outfit, but their music isn’t as straightforward as what you can listen on “Conquerors Of Armageddon” for example. Production wise, the album sounds crystal clear, each instrument is very well separated from the others, for a deadlier result I think. My only complaint would be the timing: under 30 minutes for an intro and seven real songs is a little short, but the quality of the music easily redeems this little annoyance. Support this interesting band which prove one more time that Brazil, along with Poland, is the red hot zone when it comes to deliver Death Metal of the finest brand. Contact: www.abominattion.cjb.net; e-mail: abomination@bol.com.br