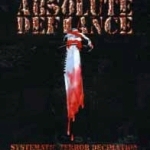 ABSOLUTE DEFIANCE is not a new act. They come from Indonesia and until the release of this debut album, they were called VILE. For obvious reasons (maybe you don’t know that there is another VILE from the States that is near to release their second album through Relapse Records) they took the decision of changing their name. As VILE they released various cassette LP’s, being “Systematic Terror Decimation” the latest one they released (through a local label called Edelweiss Productions). Displeased’s new sublabel From Beyond saw the potential of the band and decided that it was time to give them an opportunity by releasing this tape on CD format with some extra songs. Talking about the music, it’s the typical, heard a thousand times before, brutal Death Metal in the American vein. Take a bit of DYING FETUS, some riffing from FLESHGRIND, the vocal patterns from SKINLESS, put it all together and you have what those 4 Indonesian freaks do. Extremely brutal, fast, oppressive, lethal, bla, bla, bla… Death Metal like thousand others do! I don’t want to tell that the guys do it bad, because that’s not the case (in fact, they’re very skilled). It’s as simple as that the Death Metal scene is over populated by thousand bands doing the same shit and I don’t think it’ll be good for the health of the whole scene. If you’re into the whole brutal scene and you feel like if you have the need to have each and every brutal release that appears in the whole universe, try this. If you’re looking for originality, better forget it, man!