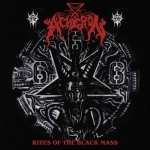 A few days ago Vincent Crowley announced the last two shows of his creature, ACHERON, after 30 years of a honorable career. He founded the band in 1988 and it will be officially over in September 2018. The bad news never end: this is the first thing I thought of, when I read Crowley’s statement on his Facebook page. Well, I may seem a little cynical and kinda reactionary, but I would prefer to see less new and useless bands starting their journey into the underground, instead of reading about another cult name ready to throw in the towel. Yes, I feel that over the last years my disdain for the new wave of old school Death Metal has gone up quite significantly. I mean, at first, I used to give a chance to these bands and sometimes I actually enjoyed some of them, but now I get instantly annoyed. It’s a matter of personal taste, no doubt about it, but I’m absolutely sure that the originals are always better than the imitations and "Rites Of The Black Mass" by ACHERON is a prime example of what I’m talking about. This album is a true masterpiece of uncompromising American Death Metal: it was recorded in the right time (early 90s) and in the right place (partially at the legendary Morrisound Studios in Tampa, Florida), it was produced by the best sound engineer for this genre (Scott Burns) and was composed with a high level of knowledge about the satanic themes which the lyrics deal with (Crowley was involved with the Church Of Satan). This gem was originally released in 1992 by the German rip off label Turbo Music, that didn’t send any royalties to the band (fuck off). Then it was reissued a bunch of times by various labels throughout the years, becoming a sort of hard to find collector’s item. Fortunately, the dutch label Vic Records has just re-released "Rites Of The Black Mass" this year in a fully remastered edition and with a restored booklet (which features a different band logo and an in-depth interview that Wannes Gubbels of PENTACLE did with Vincent Crowley – Frank). It contains 22 songs for almost 50 minutes: 20 tracks from the original studio sessions and the "Promo 1990" as bonus material. The peculiarity of this album is that each song is preceded by an intro / interlude composed and played by Peter H. Gilmore, High Priest of the Church Of Satan. Organs, synthetizers, chants and effected voices that help to create a pretty dark and evil atmosphere. Regarding to the music, ACHERON plays pure American old school Death Metal, mixing some fast songs and some slower ones. The fast parts have a very raw and primitive approach: blackened tremolo picking melodies and traditional blast beats à la VON. Pete Slate’s riffing reminds me of the simplest and most minimalistic songs from DEICIDE’s debut album: direct, brutal and evil, all enriched by some killer and noisy solos. The mid-paced and slow parts, by contrast, are more in the vein of AUTOPSY’s "Severed Survival", VITAL REMAINS’ "Let Us Pray" and early OBITUARY ("Slowly We Rot" and "The End Complete"). Behind the kit there’s James Strauss, known for playing also in the underrated Black / Thrash Metal band SATHANAS. He does a very good job in terms of dynamism, rollings and double bass. Crowley’s bass is not very audible, whereas his vocals are a brilliant example of the Floridian Death Metal style, comparable to those of John Tardy (OBITUARY), Glen Benton (DEICIDE) and Brett Hoffman (MALEVOLENT CREATION). Another highlight is the guest appearance by Mike Browning from mighty NOCTURNUS as backing vocalist. ACHERON’s lyrics are about satanism, of course, and are written both by Crowley and Gilmore. What we have here is an accurate knowledge and literacy of Anton Szandor LaVey’s philosophy that conceptualises Satan as a representation of self-spirituality and individualism. So, you won’t find tons of pointless curses or blasphemies like in the lyrics of the newest ultra-satanic, super-demonic and christophobic copycat band, but here is all very well studied and in full knowledge of the subject matter. You can skip the two bonus tracks from the "Promo 1990", because the sound quality is very poor, maybe they’re interesting only if you want to listen to the band’s improvement during its formation years. What else can I say? Any true Death Metal fanatic ought to have "Rites Of The Black Mass" in his collection. Buy it without hesitation! www.facebook.com/acheronband, www.vicrecords.com