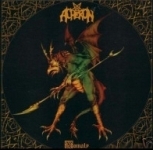 The fact that the only ACHERON CD in my personal collection is their "Compendium Diablerie" demo compilation should already speak for itself… I very much like the raw musical attitude they had in those early days, especially when Mike Smith (of SATHANAS) still used to be their frontman. Unfortunately mainman Vincent Crowley went on to explore different paths pretty quickly and ACHERON almost became a totally different band, musically speaking. So, even though I always liked a couple of songs from the regular albums that I got my hands on, and with all respect to their ongoing search for a unique style on their own, I never really considered myself the biggest fan of these guys. And this new mini CD certainly won’t manage to change that either. "Xomaly" is actually even a rather superfluous release! Two tracks (as well as two moody instrumentals / intros), that both will also be featured on the next ACHERON full length "Rebirth" (in different versions though) by no means justify the purchase of this (limited edition) disc. According to a little note on the booklet’s backside, it is mainly meant for "the loyal ACHERON legions…", but hey – they still have to spend their money on it, don’t they? Musically ACHERON anno 2003 sound extremely atmospheric, due to the permanent use of keyboards in the background. This, as well as the additional female vocals (!!) and the technically very well executed leads, completely take away the raw heaviness that Crowley himself luckily still tries to deliver through his brutal vocals. While the titletrack knows to impress quite a bit with its "BOLT THROWER with keyboards" type of writing style, I consider the rather long (eight and a half minutes) ‘The Kindred’ as way to experimental and complex for a band like ACHERON. Especially the song’s middle section, which once again features female vocals, clean male vocals, keyboards and a way too technical overall songwriting approach, reminds me a lot more on some weirdos from Scandinavia, than the brutal Satanic horde, that ACHERON once used to be. From a musicians point of view, ACHERON have certainly progressed immensely throughout the years (no real surprise, if you have great players such as INCANTATION’s Kyle Severn on drums and BURNING INSIDE’s Michael Estes on lead guitar), but for a fan of brutal music, this is quite a disappointing evolution. www.warlordrecords.com, www.acheron666.com