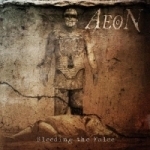 Starting where Swedish AEON’s predecessor DEFACED CREATION left with its single, critically acclaimed album “Serenity In Chaos” (1999) the musical direction is still plain and simple heavily DEICIDE influenced American Death Metal. Brutality and catchiness are apparently equally important to this quintet from Östersund and songwriting-wise they are absolutely successful in achieving this goal. Excellent riffing, intelligible and unsophisticated growls from the bowels of hell plus a good sense in varying tempo to keep the songs interesting and avoid a monotonous blast orgy as there are way too many these days. Unfortunately the bass drum sound totally sucks: it is uniform, too clinical and lacks impact – at least in my opinion. Also the guitars could have been less sterile sounding and a bit more crunchy. Apart from that “Bleeding The False” is a pretty cool album, filled with primitive antichristian contempt, energetic and inspired musicianship and songwriting that is nothing but sheer quality. However, the bass drum still sucks and the musical direction is not really new these days, too, but if bands like the already mentioned ones, SANCTIFICATION, INSISION, INFESTDEAD meet your taste, try this out! www.uniqueleader.com and www.aeon666.com should have all other required information for you! As I like funny Country songs AEON deserves a two-thumbs-up-bonus for their acoustic version of track 12 ‘God Gives Head In Heaven’, which you’ll find at track 15. I laughed my ass off, please do a whole album of these songs once in a while, hehe!!!