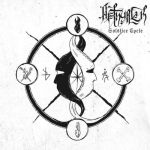 AETHYRICK received kudos for their last year’s debut "Praxis" and this output features the two prior released demos "The Trident-Bearer" and "Athanator Of Sorcery". None of the demo songs found its way to the debut and since the original demo tapes were strictly limited to 81 respectively 93 copies I guess there is a great demand by the fans, although the criticism of making a quick buck can not be denied. But after I have been listening to the six tracks such concerns quickly vanished. Black Metal in a very reduced manner regarding the use of instruments (including keyboard / synthesizer) and vocals. But that is exactly the reason why the songs are developing such an impact on the listener. It is like every element of the music can evolve and is seated within the songs. For me the six songs captured the essence of Black Metal perfectly. Raw, aggressive, sorrowful, epic and therefore romantic in the primal sense of the word. Regarding the tempo the duo from Finland covers all ranges, from fast blast beat drumming to slow, delayed pace. The guitar riffs have a more analog, warm sound and yes, there is an audible bass guitar. Luckily high-pitched screams are totally missing and the rasping vocals are a bit varied from time to time. At some moments (‘The Mouth Of The Eye Opens’) the synthesizer / keyboards are pretty dominant. If one could make a reproach then it is the fact the band sounds quite often like BURZUM during "Det Som Engang Var" and "Hvis Lyset Tar Oss" and sometimes is on the edge of being a copy-cat. Hopefully AETHYRICK are making a finer way, personally and musically. Last note: "Solstice Circle" is released on CD, LP and digital download. For more info please visit www.aethyrick.com and www.thesinisterflame.com