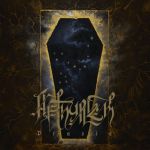 The orthodox Black Metal scene is also thriving in Finland, as in many other countries these days. AETHYRICK is a quite new entity, formed in 2016, now ready with their first full length album, after releasing two demos, which you can find on a newly released compilation entitled "Solstice Circle". The band consists of Gall and Exile, which so far have had luck with not giving away who they are, or what their positions in the band are. Though it doesn’t sound like AETHYRICK is the first band they have been composing and recorded music for. The music has its roots in the second wave of Black Metal and is well composed. There is some effective basic riffing, some chilling melodies and the atmospheres are built well. The use of keys are little, but when they are used, it is quite effectful. The vocals are quite one dimensional, a chilling rasp, though it works quite well in this context. "Praxis" is a decent effort from this duo. It is not far off, what has been delivered during the ages of Black Metal, though has its own little mark on the scene. The music is quite emotionally touching, that is of course a personal matter, which is hitting me and not something that are destined to hit others. Though if it does, the music and the atmosphere is lifted a height or two. Enter the wind of sorrow: www.aethyrick.com, www.thesinisterflame.com