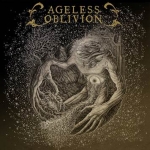 This is not your average progressive Death Metal band! The term "progressive" has been overused during the years, got robbed of its real meaning. But "Penthos" can only be classified as a progressive record. AGELESS OBLIVION are from the UK, and "Penthos" is their second full length album after "Temples Of Transcendent Evolution" from 2010. It took the quartet nearly four years (and a line-up change as well) to create this album, and the result is worth the years of work and creativity. Musically, we find a very complex mix of technical Death Metal in the MORBID ANGEL vein and dark, sometimes very negative soundscapes that remind of NEUROSIS or FALL OF EFRAFA. Along with these main influences comes an atmosphere that sometimes remind of Black Metal acts and some noisy bits. To prepare the innocent listener for those epics, the opener ‘Wolf’s Head’ comes along pretty straight, fast and brutal, before ‘The Midas Throat’ presents the first distracting noisy influences. But that’s all pretty straight in comparison to ‘Glacial Blood’, that is infiltrated with NEUROSIS styled soundscapes, and some moods that remind of MINDROT. Is it pure awareness of the own strengths that motivated AGELESS OBLIVION to place a twelve minute colossus in the middle of their record? At least it is a very good decision to place a real highlight that early. The monolithic ‘Where Wasps Now Nest’ is nothing less than a doomy landscape of Noise and Metal, filled with outbreaks of speed, a disturbing epic masterpiece. This is not the music to listen to with your headphones on when you’re in a destructive mood. The instrumental interlude ‘Submergence’ leads the path to a little release, since the following ‘Furnace’ is not that challenging, due to its rather conventional beginning, and spiced with grooving moments and some (early) MESHUGGAH styled shredding in the end. Next up is ‘Those Who Fed Of Light’, in my ears the weakest song – but that’s complaining on an extremely high level here. This one is a little too fiddling, like rather "conventional" Prog Death, before it turns into a gloomy mood. ‘A Crawling Ingression’ is a surprisingly simple, brutal and not too demanding kick in the face that just relaxes the listener a little bit before the final puzzler comes along. The title tracks ‘Penthos: Lament’ and ‘Penthos: Omnipresent’ are a musical diptych, both of them starting off gloomy, before they become brutal and disturbing steamrollers full of dark matter. What AGELESS OBLIVION created here is an album that needs its time to unfold its complete dark magnificence. But "Penthos" was worth the time I spent with it. For those who do not fear! Check the band at: www.facebook.com/agelessoblivion, and the labels at: www.siegeofamida.net, www.centurymedia.com