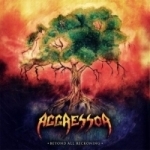 AGGRESSOR
Beyond The Reckoning
(self-financed)
49:12min

AGGRESSOR is a young melodic Thrash Metal band coming from Ottawa, Canada that has been around well over 6 years. The guys released their debut studio 9-track album, "Rape The Willing" on their own, which gave them some name, especially in their home country Canada. Now – 4 years later, they have also put out the follow-up record on their own, titled "Beyond All Reckoning" – and the first thing that I noticed right away, the album cover does remind me of the same concept that the Finnish Progressive / Folk Metallers AMORPHIS used for their 9th studio record, "Skyforger". Well, maybe just pure coincidence but it looks very similar anyway, having different colors though. As for the music, the Stephenson bros (whose names can also be associated with ANNIHILATOR, BËEHLER and CAULDRON) and their 2 other band fellows, have recorded a very solid, yet strong sounding record altogether. The guys musicianship is on top-notch level – and it honestly amazes me why they haven’t got signed by any label yet. "Beyond All Reckoning" counts on strong melodies and riffs down the line that are supported by Brian Stephenson’s powerful vocals. Brian’s singing style – then again, brings such fellows as Matt Drake of EVILE, Dave Mustaine of MEGADETH and even James Hetfield of METALLICA to my mind, so one can pretty much know what to expect from him vocal wise. There’s actually no weak or dull moments within their songs. The balance between melodic and more straightforward thrashy parts, is something they have obviously been thinking of carefully when putting their songs into the very final shape, providing a very mature and professional touch to them – and giving a feel like the guys would have been playing together for ages already. The production also earns some extra points of a general acceptance, leaving enough room for every instruments to breathe – without having this suffocating element involved within either. The next step for this promising, melodic Canadian Thrash Metal act is to find a caring home in some hard-working record company that believes in them, and that gives their undivided 100% support to them too without any conditions. If that is meant to happen some day, then a bright future will undoubtedly be theirs. www.myspace.com/47616115