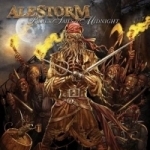 The curse of the seven seas is visiting Europe again – the second time this year after the release of their “Leviathan” single – and ALESTORM will not return to their home country until all rum has been drunk and all family treasures have been captured. The band is currently “swimming” on a big wave of success and their second album “Black Sails At Midnight” will not change anything about this status. Great Heavy Metal mixed with a big portion of pathos but also a lot of passion – so the musical direction is clear – right into the middle of the Pagan cult. But ALESTORM does not have to fear any other leading bands like TURISAS or ENSIFERIUM because their music has still its own character. The title track is furthermore the proof that the band is not only setting their sails into shallow waters but can also survive a “heavier “storms without any damage to their ship. Due to the fact that I don’t really care about any musical Metal borders – as long we are talking about METAL – there is no reasons to avoid this great album – the Black Death can be found on a lot of other Pagan long-boats but this Scottish frigate is still a proud vessel. www.napalmrecords.com, www.alestorm.net