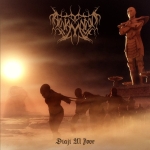 Do you miss the original rebellious spirit of Metal in general and extreme Metal in particular? Than this one is for you! In an absolute Muslim regime, led by a fanatically religious authority, it is forbidden and thus really dangerous only to play Western music. Black Metal is more or less life-endangering. Despite that, there is ALNAMROOD, named after the presumably mythological figure of Nimrod, the “Non-Believer”, an ancient Arabian monarch. This band is from the Eastern Province of Saudi-Arabia, their members remain anonymous due to the aforementioned reasons. But the mere fact that this band exists is already rebellion in the Muslim world. I can’t tell you exactly what the lyrics of ALNAMROOD are about, since the band sings in Arabian, but the choice of the band’s moniker and the name of their Canadian label Shaytan (Arabian for devil) hints on non-religious and non-Islamic topics. So much for the background of ALNAMROOD. Even though the band hails from a nation that is more than just a developing Metal country, they are very active. “Diaji Al Joor” is already their sixth album since 2009. And how can one imagine Black Metal from Saudi Arabia? Well, very special, of course, because ALNAMROOD are not a pure Black Metal band. Instead, they started with the intention to blend Metal with folkloristic Arabian music, and time proved that Black Metal was the best style of Metal to do so. This mix is a very interesting one, since ALNAMROOD are meanwhile experienced enough to blend the different styles in a very fluent manner. Of course the recording quality is extremely rough, but if you take the circumstances into concern, “Diaji Al Joor” sounds good enough, and it adds to the special charm of the music. The fact that all songs are sung in the Arabian language is quite irritating at first, but the very hard sound of the language fits, when you listen to ALNAMROOD more than once or twice. So, if you are into Black Metal with ethnic elements and sick of all these drinking music stuff from Scandinavia, ALNAMROOD could be your next discovery. Find out more at www.alnamrood.com or www.facebook.com/alnamroodofficial. And for the label, visit: www.shaytanproductions.com