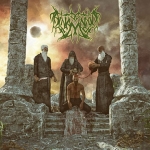 Saudi Arabia. A land of magic, mystery and… Black Metal! Well, I am also sure that death penalty or severe consequences can be reached for Metalheads in that zone, which speaks of how humanity is still in baby steps regarding conscience. But that has not stopped this mad men from Arabia and they have released so far 6 full length albums and this one is their last work, a compilation with remastered tracks form their career that as is stated in the album title, celebrates ten years. The style of this band, that has been dwelling with some line-up changes and the use of drummers and programmed drums, is that of a quite interesting form of Black Metal that uses a lot of Folklore sound and influences in their melodies, but also add some interesting touches of Heavy Metal and Thrash to make it all more exotic. Even the vocals have some sort of punked-out sound to it, which reminds us that Metal and Punk clashed to make it far more extreme. As a matter of fact I think his vocals are quite adequate and sound very angry and pissed off. The production values are quite good for what I can only imagine would have been the struggle to record such god-insulting music into the world, yet there is some charm in the raw sound it comes out of the speakers. As a compilation, you will be treated with some sound differences from song to song, yet their style is consistent. The band is actually comfortable doing a mid tempo kind of melodic Black Metal, sometimes with a very strong keyboard presence, and always using a very subtle melody as base of their songs. Early EMPEROR and some early DIMMU BORGIR will give a reference. Their last studio album “Enkar” is actually a very good one, with better production values, more Punk in the vocals, but the Punk that is pissed off, and also has a slight Death Metal aura, giving at times a sound not far away from ARGHOSLENT, with hints to ABSU and MELECHESH. Still this compilation is also a very good way to get into the world of Metal in places that one has to have more guts to be a fan… and more to be a musician. Just that alone is worth to listen to them. www.alnamrood.com, www.facebook.com/alnamroodofficial, www.shaytanproductions.com