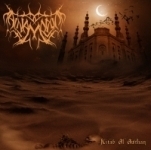 Now something a bit more interesting and different for a change. ALNAMROOD (the name translates to ‘non-believer’, coming from an ancient historical autocratic character, by the way) is a Black Metal band coming from Saudi Arabia; in a country where playing this type of music is highly forbidden – and getting caught by playing this type of stuff, you may end up in one of the country’s most infamous jails and getting gang raped there if you are lucky, I mean. A bit more seriously speaking, even if ALNAMROOD was formed just in 2008, the band has released 3 full-length albums and one EP thus far. The band’s latest 9-track record is called "Kitab Al Awthan", roughly translated to "The Book of Polytheism" in English. The vocals are sung in archaic Arabic and the band has fully taken advantage of their Arabic roots of the past times. In a way they do remind me of early MELECHESH here and there, sounding relatively raw and unpolished but still having a very unique, unorthodox and original approach to their stuff all in all. Lyrically the album compromises the ancient beliefs of the Arabs, representing the myriad demons, djinn, demigods and deities that all represented the polytheistic culture of pre-Islamic Arabia, some 1600 years ago. As much as the album may excite, attract and provoke a listener by everything it represents in its own unique and interesting way, it’s kind of a pity that there’s no real drums used on this record (just programmed drums), the guitars’ sound is somewhat thin and weak and the bass sound is basically nonexistent. A plethora of some oriental Arabic instruments are the ones that are able to create the needed, strong atmosphere for this album but unfortunately a lack of the aforementioned instruments – or the weak use of them, eat up some of the album’s intensity and true strength that this album might otherwise contain more of. Despite this, "Kitab Al Awthan" is one of those more interesting and unique sounding Black Metal records that have crossed my path within the past 2-3 years or so. So, is "Kitab Al Awthan" worth checking out perhaps then, you may curiously ask? You bet it is. More about ALNAMROOD can be found at: www.myspace.com/alnamrood, www.shaytanproductions.com