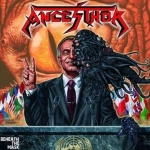 Mexican Thrashers ANCESTHOR managed to impress me a hell of a lot on their debut album "The Human Nature" in 2011, clearly showing their claws are sharp enough for churning out some aggressive, crispy and frantic old school Thrash Metal that went under my skin right away. The same thing continues on the band’s follow-up album "Beneath The Mask" basically, the ANCESTHOR camp thrashing their hearts out the way like tomorrow would never come for them. So why to fix something that ain’t broken. Stick to the effective weapons that you have, and worked so well at the very first time already, right? However, this time while the band’s Thrash engine is again full of raw power and stuff, ANCESTHOR have also added a few calmer sections here and there into their songs – acoustic interludes, a couple of slower tempo changes and stuff, just to keep their shit perhaps a bit more interesting for the listeners. The title track ‘Beneath The Mask’ is a good example about just that; the guys’ willingness to expand their soundscape a little bit further but in a good way. If their debut album "The Human Nature" was closer to "Possessed By Fire" by EXUMER content wise, "Beneath The Mask" is closer to "Rising From The Sea", EXUMER’s 2nd album – without saying they would ape anything off from that aforementioned record but I just wanted to give you a clue what kind or progression (or regression for some) did happen between those semi-legendary German Thrashers’ first two albums. ANCESTHOR count on minimal elements within their songs but they make them work for them in a very optimal way indeed, without over-stuffing the songs with something that would only make the songs sound fuller, or some other way more complex and shit, you know. Hence "Beneath The Mask" is a somewhat successful and pleasing follow-up record from these Mexican Thrash Metal men, certainly standing the test of some nonstop listen, I believe. To get more info about ANCESTHOR, simply find your way to: www.facebook.com/ancesthor, label: http://metalwaysrecords.bandcamp.com