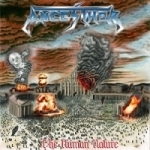 Mexicans know how to thrash. Yep, they indeed do. There are more than a fair amount of good examples about Mexican Thrash Metal bands that have managed to stir up Metalheads’ curiosity about them – some better, and some worse. This 4-piece act obeying the name ANCESTHOR, clearly belongs to that better half of Mexican Thrash Metal bands that really have this sort of inborn tendency to kick our fragile asses well enough. Well, at least my butt is full of blue bruises after the band’s merciless Thrash-beating session, lasting over 40-minutes – ah well, metaphorically speaking of course. ANCESTHOR lead heavily on things old school within their mid-paced Thrash Metal approach, reminding me surprisingly much of EXUMER’s "Possessed By Fire" era, a bit of SLAYER – and when it comes to some specific guitar melodies here and there – surprise, surprise, it’s IRON MAIDEN’s name that tends to pop up from time to time. With a combination of all aforementioned elements, they all create a nice backbone for ANCESTHOR’s beautifully floating, very riff-based Thrash Metal, which is a real pleasure to listen to. Vocalist and guitarist Joseph Juárez has a nice, somewhat raw and testosterone-oozing tone in his voice that fits into the band’s hard-boiled Thrash Metal real well. I bet I am not the only one here to say that he brings Mem Von Stein (vocalist of EXUMER) to mind, so feel free to take that as compliment, dear Joseph. At the end of the day this is the kind of Thrash Metal that I prefer listening to, paying a great amount of homage to some true traditions of Thrash Metal. ANCESTHOR have also realized wisely that less is more as far as their song structures are concerned. Then again, you can hardly go wrong with a song title like ‘Thrash Metal Iron Smash’, can you? www.myspace.com/ancesthor, www.metalways-records.com