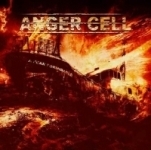 ANGER CELL is a melodic Death Metal band from Finland that has been around since 2007. Having a demo and one EP on their recording roster already, it was just a matter of time when these Finns would record their debut full length. Well, that has happened now: "A Fear Formidable", the band’s 11-song studio album, to be honest doesn’t of course invent the wheel again but still manages to offer a pretty solid package of melodic, heavy and well executed Death Metal that mostly takes its nearest influences from the once so influential Gothenburg melo-Death Metal scene, but doesn’t hide some of those occasional Thrash influences anywhere either that they have sucked in for this album. For their true advantage it also needs to be said that the whole band sounds well rehearsed, kind of knowing exactly how they want to offer ANGER CELL on a silver plate for the Metal music loving world, which is always a good thing. ANGER CELL’s melodic Death Metal flows somewhat effortlessly, having enough hooks and moods to be found within it that securely keep listeners’ attention tightly focused on the record. Vocalist DC has a nice grunty yet masculine tone in his voice, which adds a welcomed contrast to some of those clean vocals parts that they also use pretty cleverly within the songs all in all. Otherwise the band seems to rely exactly on those things on "A Fear Formidable" where they happen to know they are good at. The good production on the record also helps to raise ANGER CELL’s head above the surface of the water, For the band’s debut, this is definitely a good start from them. Warmly recommended especially for the fans of (the past) Swedish melo-Death Metal scene. More about ANGER CELL at: www.angercell.com, label: www.inverse.fi